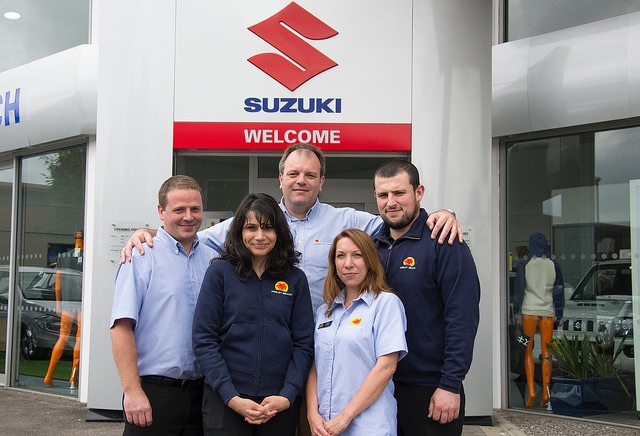 Motor dealer Pebley Beach has welcomed a clutch of new starters, having said goodbye to some long-serving members of staff.

Showroom manager Natalia Wilson – who has been with Pebley Beach for 18 years – has left the company to take a break from working weekends, and is currently in the Cayman Islands; service advisor Lloyd Pickup – who was last year named one of Hyundai’s top brand UK ambassadors – has started a job closer to his family in Bristol; and Master Technician Steve Strange has moved to Hyundai’s UK headquarters in High Wycombe to train other technicians, a move made possible by Pebley’s Train To Leave programme for high-flyers.

And the Swindon-based Hyundai and Suzuki franchise has been joined by four new faces.

Receptionist Laura Lockyer is the first face visitors to the Paddington Drive showroom will see, and it will be a familiar face to many – she previously worked for the company seven years ago, when Swindon Hyundai was run from a showroom in Eldene. Laura returns after taking time off to raise a family.

Workshop controller Chris Harkin has stepped into Steve’s shoes. He joins the company from Chippenham Ford, where he spent 12 years. He’s also had experience running his own garage.

Parts advisor Michael Davis has joined Pebley from Swindon Motor Park, where he has worked for 12 years, while service advisor Sophia Browne, who replaces Lloyd, has joined the team from TH White Land Rover, where she worked in the same role for five years.

Managing director Dominic Threlfall said: “It’s always sad to say goodbye to old colleagues, but gratifying to have been able to help each of them with their career development. We’re delighted to welcome Chris, Sophia, Laura and Mike to our growing team.”