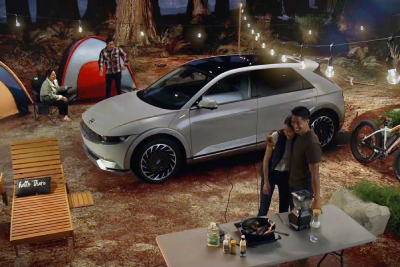 Fancy playing video games in the middle of nowhere? Or, if you want a less fantastical example, need to power camping equipment in the wilderness? You can, if you have an electric car fitted with Vehicle-to-Load (or V2L) capability, such as the Hyundai Ioniq 5.

It's a feature of the Hyundai Motor Group's E-GMP platform, also used in the Kia EV6 and the upcoming Genesis GV60, with plenty more E-GMP cars on the way. V2L means an electric vehicle can become a wheeled power source via a simple adaptor that plugs directly into the charger socket. So instead of power going in to charge the battery, charge is sent outwards, via the adaptor, to whatever you have plugged in.

In the case of the Ioniq 5, you can get V2L capability as an option (£365 at the time of writing) on mid-spec Premium models, starting at £39k, or as standard on the top-spec Ultimate, priced from £42k. V2L also includes a domestic socket inside the car, underneath the rear seats. With the EV6, you can have the technology on GT Line trim and above, but we're testing it on an Ioniq 5.

The adaptor looks just like a charger plug, but a cap opens on one end to reveal a domestic electrical socket. Plug your device into the adaptor first, then plug the adaptor into the car's charging socket. There's a power switch on the adaptor to cut power if needed, and you don't need to have the car switched on for the V2L system to work.

And that's all you need to do. Your car is now a roving power provider that can bring electricity to outdoors activities, from the useful to the entirely frivolous. It might be that you'll plug your electric mower in to the car to trim your front lawn without trailing an extension cord through the house. Or you could use the car to charge an e-bike, or boil a kettle, or pump up an inflatable dinghy...

You could also charge a stranded EV, albeit only slowly via the three-pin charger.

Or you could do what we did and play Forza Horizon 4 in CAR's office car park. Our test included plugging in a TV and an Xbox One console via an extension cable, and it worked without fail or fuss on the first try. But we don't recommend doing that; you know what the UK weather's like...

The obvious worry is that you'll empty the car's battery, but of course Hyundai has thought of that. The Ioniq 5's instrument display shows when V2L is active, how much charge is left and the rate of power it's displacing, up to 3.6kW. If your car has less than 15 per cent charge, V2L is disabled.

Vehicle-to-load: how it works

Vehicle-to-load: does it work?

Yes. It's a simple bit of technology, but useful. The platform already comes loaded with the technology – all you need is the proprietary adaptor to get it working. It really is plug and play: easy to set up, and handy when power isn't near. To find out more you can request a brochure or get in touch with a Pebley Beach Hyundai specialist on 01793 816800