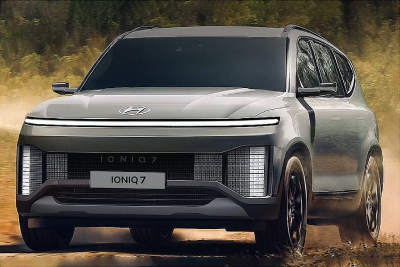 Hyundai revealed one of its largest electric vehicles yet when the covers came off the Seven concept last month. Together with the Kia Concept EV9, these two futuristic vehicles preview production-bound models that will take the Korean EV game to the next level.

What Should We Expect?

In the case of the Hyundai, we noted that its progressive interior looked equipped for a future of fully autonomous driving with a retractable driver controller and luxurious, lounge-like seating. However, it seems that the futuristic Seven, which previews the Ioniq 7, could be closer to production than expected based on comments from one of Hyundai's bosses.

"A lot of things can make it to production," said Jose Munoz, Hyundai Global Chief Operating Officer, as well as the president and CEO of Hyundai Motor North America. "It's gonna be pretty close. You'll be amazed," said Munoz when speaking to Motortrend.

Essentially, the production Ioniq 7 is already being developed and it's further along than the Seven concept leads one to believe. While we expect the production model to retain fundamental elements like the brand's Electric-Global Modular Platform (E-GMP), other aspects of the design will need to be toned down to fit in with the lower level of autonomy currently on offer. At the moment, almost all vehicles have not exceeded Level 2 autonomy, and Honda was the first to introduce a car with Level 3 autonomous capability this year.

"The interior is a little more visionary than the exterior because we have a vision of full autonomy," said SsangYup Lee who heads up Genesis Global Design. "In the meantime, we can give it [Ioniq 7] a regular steering wheel, but we still want to create a feeling of a family lounge space."

Expected to land in 2024, the Ioniq 7 is unlikely to retain the coach-style doors of the Seven concept. It will also have to be equipped with a regular steering wheel and something resembling an actual dashboard. Hyundai also said that while the transparent roof screen is possible, it may be too early to bring that to market now. With a 126-inch wheelbase and flat floor, Hyundai has plenty of room to create three seating rows with various configurations.

With development well underway and a sense from the Hyundai team that the production model won't be too far removed from the Seven concept, the brand's new electric SUV is set for an impressive debut.