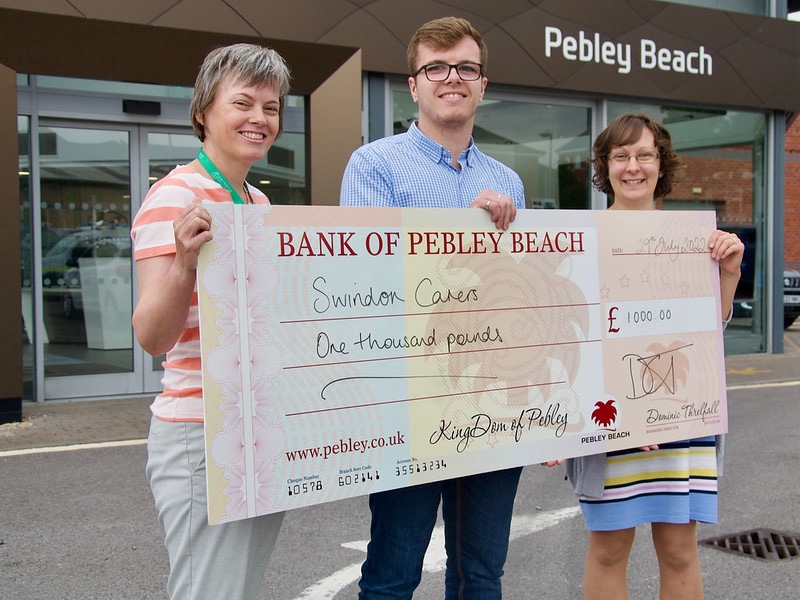 For six years, the Hyundai and Suzuki car dealership has match-funded the money raised by the charity's activities during Carers Week to the tune of £1,000.

But with cost-of-living crisis hitting fundraising activities like the Swindon Carers Centre's Walk A Mile initiative – a sponsored walk around the centre of Swindon – the firm decided to donate the entire £1,000.

Thirty participants walked a mile around Swindon town centre on Saturday, June 11 – the first time the charity had been able to do so since summer of 2019 because of pandemic restrictions.

A large banner helped to raise awareness while the group, which included carers young and old, raised £588 through sponsorship.

They were joined by South Swindon MP Sir Robert Buckland, who said: "Raising awareness isn't just important for us – to remind ourselves that we're not alone – but to jog the thinking of other people out there who might not even realise they're carers; who might not even think in those terms.

"It's also important that we raise awareness of the invaluable contribution that all unpaid carers make to our society."

Swindon Carers Centre exists to offer support to the 21,000 unpaid carers in Swindon who look after a loved one – this could be a spouse or partner, son or daughter, sibling, parent, or other relative.

Carers range in age from children as young as five to carers in their 90s. There are currently 4,297 carers registered with Swindon Carers Centre.

Anne Saunders, media and communications manager at Swindon Carers Centre, said: "Three in five people will be unpaid carers at some point in their lives.

"Caring for a family member, partner or friend takes a lot of love, commitment, and perseverance - so it is incredibly important that carers in Swindon are recognised, valued, and supported.

"We had a wide range of people joining us for this event, young carers, parent carers and adult carers.

"Everyone came together to walk together, raise awareness and show why support for unpaid carers is so vital.

"We'd like to say a big thank you to Pebley Beach for supporting Walk A Mile again this year, their sponsorship makes a huge difference to our work improving the wellbeing of people with caring responsibilities in Swindon."

Harry Threlfall, customer services manager at Pebley Beach, said: "We're delighted to be able to support Swindon Carers again this year. Well done to everyone who helped raise so much money."

14 day money back guarantee on all new Suzukis