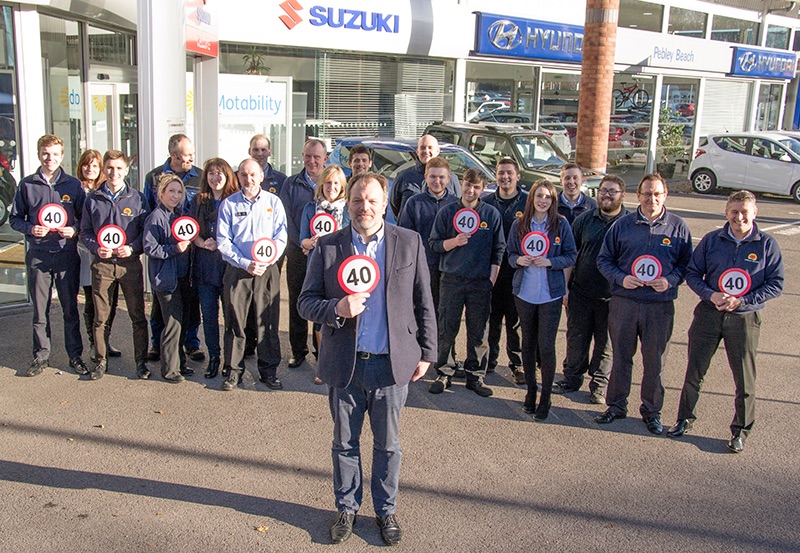 Staff at Pebley Beach are taking a deep breath as there are a lot of candles to blow out – the firm celebrates its 40th anniversary this week.

Pebley Beach Ltd was established on 26 November 1976, although the name is much older than the company.

The brand began life in 1942 as a Purton-based bus company, running trips to the seaside and ferrying railway workers around. The firm was based near a duck pond, and local people would joke that they were going to the pebbly beach for their holidays.

In the 1950s Pebley Beach Coaches relocated to Wroughton, and it was the site that was purchased by Ebbadine Ltd  - the Threlfall family –  who had a growing chain of petrol stations in the Swindon area, in 1981. They liked the name so much, they kept it.

Pebley Beach started selling Lancia cars in 1984, and became the Swindon franchise holder for Suzuki in 1993.  The current MD Dominic Threlfall took over the running of the firm in 1998.

By 2001, Pebley Beach – still based at Wroughton – was the second-largest Suzuki dealership in the UK. The firm opened a second base, in Cirencester, and in 2004 acquired Swindon Hyundai at Eldene.

In 2011 the firm merged its Wroughton and Eldene operations, moving into an impressive new showroom at Paddington Drive in Swindon.

Over 40 years the shape and style of Pebley’s range of cars have changed. Even the fuel that drives them is changing, as motors driven by hydrogen and electric batteries replace petrol and diesel.

But one thing that has stayed constant is the firm’s dedication to customer service. “Our customers are everything to us, and every innovation we introduce is done with the customer in mind,” says Dom, who is invited to give talks around the globe on providing excellent customer service.