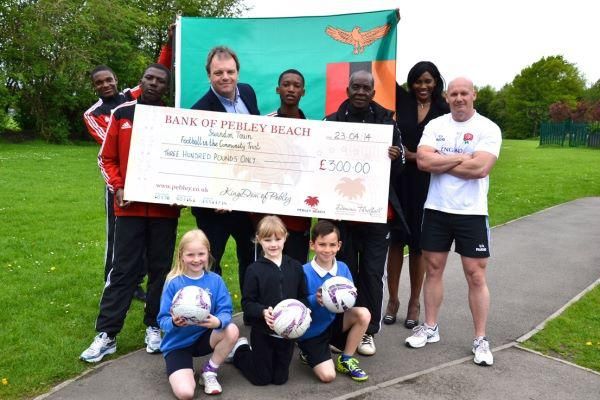 The green and striped flag of Zambia flew at Robert Le Kyng school in Swindon on St George's Day, as children celebrated the special relationship between their community and Livingstone, the tourist capital of the African nation.

Leading assembly were soccer players and coaches from Livingstone, an historic British colonial city near Victoria Falls, and named after the famous explorer.

But he spoke also of the struggles facing the country's young soccer stars - most of whom play barefoot.

Among the Zambian delegation were Mwikisa Sinyana and Albert Siwakwi, who had been chosen from 1,000 rising soccer stars to visit Swindon and train with The Robins.

"Before Swindon Town came we had 16 football coaches and we did not have knowledge. Now we have 50 coaches," Fillard told the children.

"We play football barefoot, so it is very hard. "When Swindon Town visit they bring us boots - these people have also brought us happiness and joy."

The property investor - who was born and grew up in Zambia, and helped initiate the link between Swindon and Livingstone - told the children that 2014 was the 50th anniversary of Zambian independence.

She also spoke of the importance of the relationship between the children in Swindon and Mahululo School in the rural hinterlands of Livingstone, who have been writing letters to each other and making video calls via Skype - once the Zambian children have made the long journey into the city to find an internet connection.

"The children in Livingstone want to know what life is like in England, and I know you are interested to find out about life for Zambian children," she said.

And presenting a cheque for £300 to Swindon Town's Football in the Community Trust was Dominic Threlfall, managing director of Wiltshire's Business of the Year, Pebley Beach.

"We were going to send some footballs," said Dom, "but it is more valuable to the people of Livingstone to pay for the manufacture of the footballs in their own city - that way the donation stays in the local economy.

"As a sponsor of Swindon Town Football Club, a partner of Robert Le Kyng School, and a franchise holder of Hyundai - one of the main sponsors of this year's World Cup - we're delighted to support this initiative, and will be doing more over the year to help the children of Livingstone enjoy football."