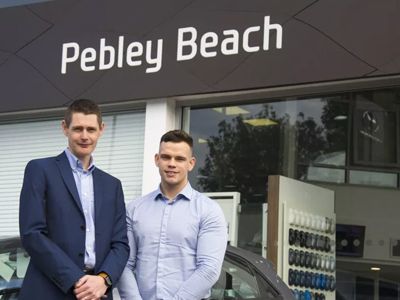 Two new appointments have added muscle to the sales team at Swindon motor dealer Pebley Beach. James Bicknell has joined the company as group sales manager while Stephen Gray – a competitive body builder – has been hired as a sales executive.

James joins Pebley Beach from large car dealership group in Gloucestershire, and will be overseeing the sales for the Hyundai and Suzuki brands across the firm’s two sites in Swindon and Cirencester.

James (38) began his career in the motor trade 17 years ago, joining Vauxhall Gloucester as a trainee sales executive and progressing to the position of business manager six years later.

He has worked for a number of brands, including Nissan, Volkswagen, and Hyundai’s sister marque Kia.

“Coming to Pebley Beach is a great opportunity to work with group operations manager Nick Pincott and a great team in an innovative business, and to work with Hyundai: one of the fastest-growing car brands in the UK,” said James.

James lives in Brockworth, near Stroud, with his wife of 15 years, Emma. They have five children – Thomas (14), Benjamin (11), Harry (10), Joseph (6) and Lilly-Mae (3) – and James enjoys playing and watching football, splitting his allegiance between Manchester United and Swindon Town.

James’ first duty was to interview candidates for a new sales position, and Stephen Gray was his choice for the role.

Stephen (28) joins Pebley Beach from a Ford dealership in Surrey, but for most of his working career he worked as a personal trainer and owned two gyms, one of which was run by his girlfriend Sharissa.

Both are competitive bodybuilders, and are moving into a new home at Tadpole Garden Village in Swindon very soon. They also love to travel, and already this year have visited Budapest, Amsterdam, Barcelona, and Dubai.

“The motor trade is a great industry to work in, and when I found out about the job at Pebley Beach I thought it sounded amazing,” said Stephen.