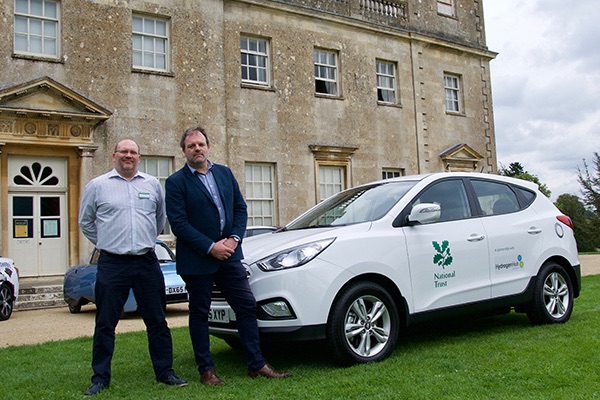 Swindon's place as a hydrogen car centre celebrated at conference

Two hydrogen-powered Hyundai iX35 SUVs looked after by the Paddington Drive-based dealership were among the lineup outside the historic building.

Inside, business leaders were hearing about Swindon's ambition to be the national centre of the innovative technology widely expected to replace petrol engines and diesel on a longterm basis.

While today's cleanest vehicles are driving by a battery, which can take hours to recharge, the tanks of hydrogen vehicles - which use the gas to charge a battery - can be refilled in five minutes or less, and offer a range of hundreds of miles.

Swindon already has one hydrogen refuelling station at the Honda manufacturing plant. A second, near Junction 16 of the M4, will be installed soon.

The conference, hosted by the Hydrogen Hub, gave Swindon business leaders the chance to hear from companies that are already using hydrogen vehicles.

There are currently two hydrogen iX35s on the streets of Swindon - and only a handful in the UK.

One is owned by Johnson Matthey Fuel Cells, an industry leader in the technology. The other is leased from Arval by the National Trust, which has its Central Office in the town and uses it as a pool car available for any member of staff to use for business journeys.

The conference heard from National Trust procurement specialist, Steve Harland, who said the charity has an ambitious target to halve its dependency on fossil fuels by 2020 and being part of Swindon Hydrogen hub fitted with its strategy of investing in and trialling renewable technology.

The Trust also runs a number electric vehicles, but it is the geographical range of hydrogen cars that makes them such an attractive proposition.

"As the infrastructure develops, with more hydrogen refuelling stations across the UK, we'll be able to use our hydrogen iX35 to travel to and from an ever increasing number of our sites”

"In the first three months of having the car, nine of our staff have clocked up 1,500 miles, and they've all given positive feedback. One said driving was like floating; another reported it was a joy to drive."

The conference also heard from Sean Sadlier of Swindon-based vehicle leasing firm Arval, which is helping its clients UK-wide to explore petrol and diesel alternatives.

"Our clients want to reduce their carbon footprint, and hydrogen can become part of the solution for them," he said.

And unsurprisingly, another early adopter of the cutting-edge technology is the Science Museum, which uses a Toyota Mirai to transport old and precious science books from its storage facility at Wroughton to its headquarters in London.

Among the museum's collection, revealed Matt Moore, are a couple of artefacts which demonstrate that while the combustion engine has dominated vehicle technology for the past 100 years, it has never been the only game in town.

The collection includes an 1888 electric carriage by Bersey, which was used as a taxi in the days of horse-drawn cabs, and a 1956 example of a hydrogen-powered car: a DAF 44 which weighed twice as much as its petrol-driven alternative.

Clare Jackson of the Hydrogen Hub said it was the group's intention to make Swindon "a hydrogen economy".

And she announced a new £23m grant scheme from the Government's Office for Low Emission Vehicles (OLEV) to fund new fuelling stations and business fleets.

Up to 75 percent of the cost of a hydrogen-powered vehicle could be met by government funding, and interested businesses were invited to submit their applications through the Hub.

Meanwhile, domestic drivers will have a chance to adopt hydrogen technology from next year, when an as yet un-named new Hyundai is launched.

"Hyundai was the first to introduce a mass-produced hydrogen fuel cell car to the UK market with the iX35," said Dominic Threlfall, managing director of Pebley Beach.