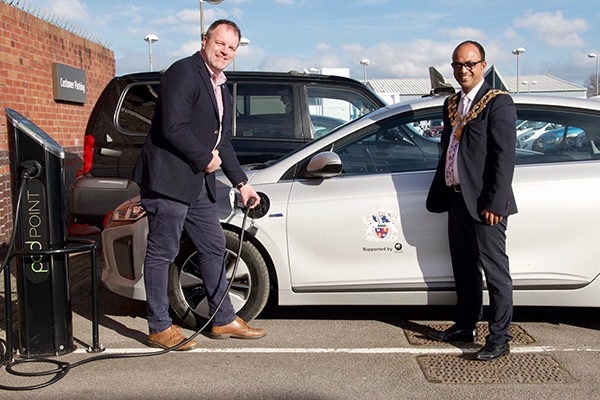 When the Mayor of Swindon rolls up to engagements in his official car he'll be doing it in a greener way, thanks to a commercial partnership with Pebley Beach.

The saloon – which was named What Car magazine's best hybrid of 2018 – combines a petrol engine with an electric motor to deliver reported fuel consumption of more than 250 mpg and emits just 26g of CO2 per km – good news for taxpayers’ wallets and lungs.

It is the second Hyundai Ioniq hybrid supplied to the Office of Mayor by Pebley Beach. Councillor Ali's predecessor, councillor Maureen Penny, was the first to enjoy the hybrid as her official car.

The car is capable of cruising around Swindon for 39 miles using battery power alone, while the efficient 1.6 litre GDI petrol engine will carry him to engagements outside the Borough.

Those official engagements include three trips to London in the next month: and in more good news for ratepayers, the Ioniq plug-in is exempt from the capital's Congestion Charge.

"My ambition, and that of the council, is to be as green as we can be – and it is our responsibility to lead by example when it comes to reducing our carbon emissions," said councillor Ali. "This is important for our borough, our country, and the world."

"I am proud and honoured that Pebley Beach is supporting the Office of Mayor in this way."

Dominic Threlfall, managing director of Pebley Beach, said: "We're delighted that the mayor has chosen a Hyundai Ioniq as his official car.

"Our ambition throughout this arrangement is to provide the Office of Mayor with increasingly more fuel-efficient and environmentally-friendly cars as they become available.

"Whilst the Hyundai Ioniq plug-in hybrid is the natural choice today, it would be great to see councillor Ali, or his successor, being driven in a Hyundai Nexo, which is powered by hydrogen fuel cells and is due to be rolled out in the UK in 2019.

"Swindon is a UK leader is hydrogen fuel cell technology, and having our First Citizen behind the wheel of a hydrogen-powered car would be a fitting way to demonstrate the town's status."