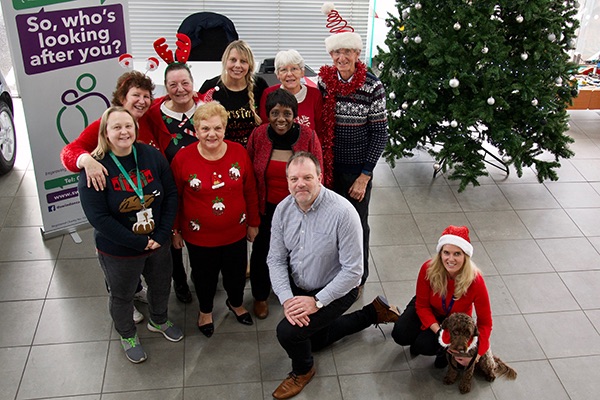 Back in the summer, the Hyundai and Suzuki dealer pledged to match every pound raised by Swindon Carers Centre’s Walk A Mile In My Shoes sponsored walk up to £1,000.

Not only did their pledge spur on supporters to hit their £1,000 total, they exceeded it – raising almost £2,000. With Pebley Beach’s donation, the campaign total was just under £3,000.

And to say thank you, seven of the 14-strong Swindon Carers Choir performed a selection of carols and Christmas songs at the showroom on Tuesday (December 12).

The choir represents some of the 4,000 unpaid carers, whose ages range from between five and 96, who are supported by the charity.

Typically, the carers are looking after a spouse or family member. Younger carers, of whom there are around 900 in the borough, are often supporting a parent.

The weekly choir rehearsals provide a break from caring, and a platform for mutual support. The choir – which was formed a year ago – performs around Swindon, raising awareness of the charity.

To see a video of the choir in action, visit https://youtu.be/faCHqhNUHC0