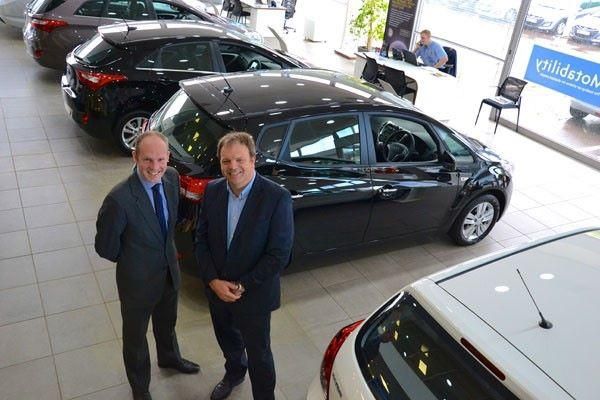 Mr Tomlinson, MP for North Swindon, was invited by Pebley Beach managing director Dominic Threlfall, who said: "Electricians and gas fitters have to be licensed, but anyone can open a garage and fix your car."

"A badly maintained motor vehicle can be lethal, and the public need assurance that anyone working on their car is trained to the highest professional standards."

Mr Tomlinson said: "I think there's mileage in this campaign, because enough consumers have been left with a bad taste in their mouth. "I am happy to ask questions in Parliament about this."

Mr Tomlinson also pledged to fight for MOT examinations being preserved as annual requirements, following previous speculation that Parliament might seek to make them biennial.

"Half of the cars we see here fail the MOT on their first attempt," said Dom, "and that's after 12 months of driving. Two years between tests would mean dangerous cars on our roads." He said that tyres were a particular problem in Swindon. "It's all the roundabouts," said Dom. ""They wear the edges of tread very quickly.

"On a car we saw today, for example, the driver was oblivious to the cords showing on the edge. We see this on a weekly occurrence.  It is incredibly dangerous and the owner faces a hefty fine if stopped by the police."

Mr Tomlinson agreed: "You need your car to perform at its best," he said. "No-one has emailed me to complain that they have to have an MOT every year. Again, this is something I'm prepared to back."

Mr Tomlinson's visit to Pebley Beach  - Wiltshire's Business of the Year, and national Garage of the Year, as voted for by customers on comparison site motorcodes.co.uk  - was arranged following the publication of a national report which suggested Members of Parliament are out-of-touch about the motor trade. The Institute of the Motor Industry commissioned a survey of 99 MPs to find out their views on attitudes to the sector.  It found that while MPs recognised the number of jobs the industry provides - with 60 percent saying their constituents were quite likely to work in a garage or a dealership - more than half suggested the motor trade was low skilled, low paid, and dirty.

Showing the MP around the firm's state-of-the-art repair centre, where inspections are routinely recorded on video and emailed to the customer, Dom said: "Our master technicians have done more training than a veterinary surgeon has, and our commitment to apprenticeships and ongoing training means we have a highly skilled and proficient workforce." And Mr Tomlinson - who has recently been car shopping - proved himself anything but out-of-touch, praising the customer experience at the Paddington Drive showroom. "I went into a number of dealerships," he said, "and Pebley Beach was the only one where I was approached to see if I needed assistance. "It's no surprise to me that Pebley Beach keeps winning awards."