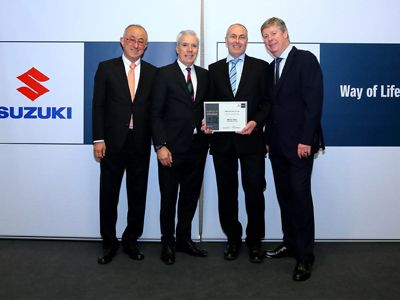 The status of Swindon mechanic Martyn Owen as one of the best in the UK has been cemented at the 2018 Suzuki Skills competition.

Martyn – who as a master technician holds the highest achievable industry accreditation – came second in the Technician of the Year category of the competition.

For the finalists – selected from an original field of over 350 entrants – there was a gruelling day of tasks and assessments to determine the winners at Horwood House, near Suzuki's UK headquarters in Milton Keynes.

Martyn, who works for Swindon and Cirencester Suzuki dealership Pebley Beach, already holds four Technician of the Year titles, having won in 2004, 2005, 2007 and 2009. This year he was pipped to the post by Barry Russell of Eastbourne Suzuki.

Managing director Dominic Threlfall said: "Customers can be assured an award-winning level of service, whether they come to us to buy a new Suzuki or call in for a service, where their car – whatever the make and model – will be worked on by one of the country’s top mechanics, supported by a team Martyn has helped to train."