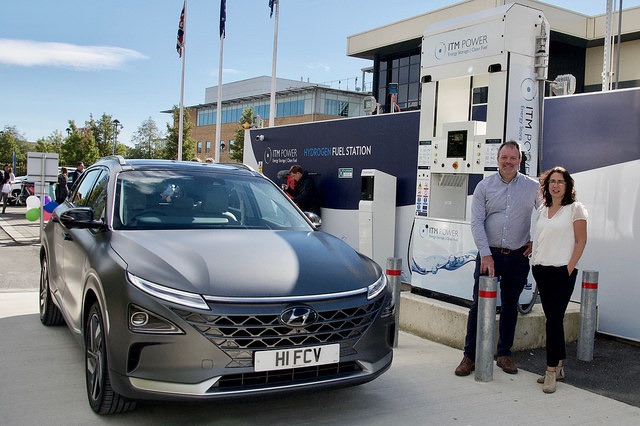 Swindon business leaders were among the first people in the UK to see Hyundai's innovative new hydrogen-powered car when it pulled up to a brand new refuelling point in the town.

The opening of a new hydrogen refuelling station at the Swindon HQ of engineering firm Johnson Matthey – which designs the fuel cells used in hydrogen-powered cars – brought the number of pumps in the UK to 17.

And Swindon, considered a national centre for fuel cell technology, has two of them.

Joining the launch by ITM Power, which has now constructed seven hydrogen refuelling sites across the UK, were a small fleet of hydrogen-powered cars, including a Hyundai iX35, which was the first hydrogen-powered SUV to be sold commercially in the UK, and a Hyundai Nexo – currently the only one in the UK.

The Korean automotive giant expects to launch the Nexo in the UK in March 2019, with dealerships and customers keen to get their hands on one of the 15 assigned to the British market.

While the hydrogen-powered Hyundai ix35 – of which 17 can be seen on British roads – was modified from a petrol/diesel version, the Nexo is the first to be designed solely as a hydrogen-powered vehicle.

The SUV will take its driver and four passengers from nought to 62 in 9.54 seconds and is capable of a top speed of 111mph. It has a range of over 400 miles and its three hydrogen fuel tanks can be refilled in around five minutes.

It comes with mod cons including lane following assist to stop drivers straying from their lanes, blind spot view monitoring – which displays the rear and side views on the central console screen when the indicator is applied – and remote smart parking assist, which allows the driver to hop out of the car and watch the vehicle park itself.

The car drives silently – allowing the occupants to benefit from the top-of-the-range Krell sound system – and emits nothing more harmful than water vapour.

Delegates at the launch heard that while battery-powered vehicles are seen by the motor industry as good short-term alternative to petrol and diesel, hydrogen promises a more sustainable solution to greener motoring – especially for larger vehicles like trucks and busses, and cars doing longer distances.

Because hydrogen cars are refuelled at a filling station, the problem faced by electric car owners – especially those without designated parking spaces – of being able to charge their vehicles at home are mitigated.

And while the bulk of the electricity used by electric cars is still produced by coal-burning power stations, hydrogen refuelling stations generate fuel on-site and are able to power themselves with a wind turbine.

The unit at Johnson Matthey – situated at Lydiard Fields conveniently close to the M4 – can generate 100kg of hydrogen a day – enough to refuel around 15 cars.

The fuel is generated using a process called electrolysis, which splits water into hydrogen, 45kg of which can stored at one time in the pump, and oxygen, which is released back into the atmosphere.

Dominic Threlfall, managing director of Swindon's Hyundai dealership, Pebley Beach, said: "It was very exciting to see the Nexo on the streets of Swindon a full six months before its official UK launch.

"Hydrogen power is the future of motoring in the UK, and I'm delighted that both Swindon and Hyundai are at the forefront of this new technology."