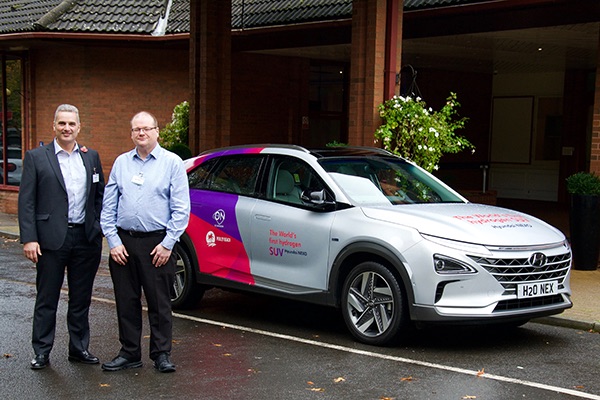 Swindon's business leaders were given the chance to get behind the wheel of a hydrogen-powered Hyundai at a networking event celebrating Swindon's place at the forefront of the fuel technology.

The Hyundai Nexo – one of only a handful on Britain's roads – was supplied by Swindon-based motor dealer Pebley Beach, the phase 1 UK distributor of the ground-breaking SUV.

And addressing the meeting of Thames Valley Chamber of Commerce at the town's Marriott Hotel on Friday, November 1 was the lead scientist in the technology that drives the car.

Dr Angus Dickinson works for Johnson Matthey, the West Swindon-based chemicals firm that manufacturers the fuel cells that drive the Hyundai Nexo and other hydrogen-powered vehicles.

He reminded networkers that Swindon is the only place outside London with two hydrogen refuelling stations – one is at Johnson Matthey, the other at Honda – and that the work that goes on at Lydiard Fields puts the town at the vanguard of an automotive fuel revolution.

"Hydrogen fuel cells have always been talked of as the power source of ten years' time," said Angus, "but it's being used right now. Ninety percent of our fuel cell products are being exported to China – it's a huge export market for us.

"Every car manufacturer in the world has a hydrogen programme. They see plug-in electric vehicles as a stop-gap while hydrogen technology is adopted."

Angus heads a team of 200 people developing and making fuel cells – up from a handful ten years ago. The technology developed in Swindon is the heart of hydrogen cars – powered by electricity generated by a chemical reaction between hydrogen and oxygen.

Hydrogen cars emit nothing more harmful than water. In fact, the Hyundai Nexo purifies the air as it goes – an indicator on the dashboard tells the driver how much particulate matter has been removed from the atmosphere.

The refuelling process also feels more familiar to drivers of petrol and diesel car drivers. Hydrogen-powered cars are refuelled at a pump and deliver a range of hundreds of miles.

A new technology, there are still only eight or nine hydrogen-powered vehicles on Swindon's roads – and half of them are Hyundais.

Johnson Matthey and the National Trust both operate iX35s – which was the first commercially mass-produced hydrogen fuel cell vehicle in the world when it was launched in 2013, and is still the most requested pool car at the National Trust's Swindon headquarters despite being left hand drive – and two Nexos.

Pebley Beach's business fleet manager Phil Brodrick, who was on hand to show business owners and managers the Nexo, said: "The Hyundai Nexo really is the car of the future today. One feature that really impresses people is the remote smart park assist function, which enables the Nexo to pull into or out of a parking space without the driver being in the car.

"Hyundai intends to add 18 new electrified models to its range in the next five years, and hydrogen technology will play an increasingly important part in getting us from A to B in a cleaner way – whether it's powering our cars or our trains and buses.

"It's an exciting future, and we're proud that Swindon and Pebley Beach and can play such an important part in it."