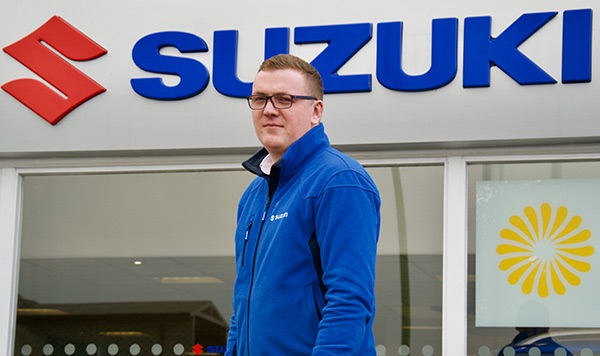 A car salesman from Cirencester has become one of the first Suzuki sales executives in the UK to win accreditation from the Institute of the Motor Industry.

Remarkably, Joe Lambert has only been selling cars for nine months - four of them with Cirencester motor dealer Pebley Beach.

After a job with a car brokerage firm, Joe joined a Swindon dealership as a salesman, but felt he was not able to reach his full potential.

“They didn’t hold me back by treating me as a trainee, and instead let me get on with selling cars, which I really love,” said Joe, who grew up in Lechlade and now lives in Cirencester.

“Nothing makes me happier than the look on a customer’s face when they pick up their dream car.”

To become accredited by the IMI, Joe had to take written tests and engage in role play situations with customers, demonstrating his knowledge about prices, model specs, and running costs of various Suzuki models.

He also needed to demonstrate his ability to deal with customers who had questions, concerns, or complaints during a gruelling one-day assessment in Grantham.

“I’m really proud to be one of the first Suzuki salespeople in the UK to achieve IMI accreditation, and grateful to Pebley Beach for giving me the opportunity to prove myself,” he said.

Suzuki aims to have all of its 300 salespeople nationwide IMI accredited. Meanwhile, the next step for Joe is Suzuki’s senior sales executives course.