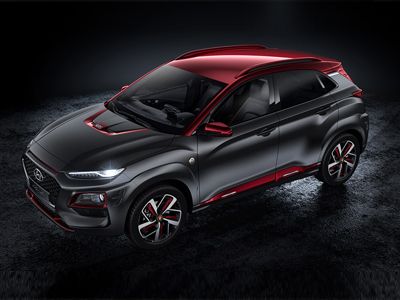 Fans of the Marvel superhero movie franchise are being urged to keep their eyes peeled around Swindon motor dealer Pebley Beach.

The limited release will fulfil the dreams of fanboys who have been champing at the bit ever since a one-off Kona Iron Man was unveiled in the US last summer.

Hyundai revealed a concept car at Kona, Hawaii – home of the world-famous Ironman Triathlon World Championship – from which the subcompact crossover takes its name.

The concept was 40mm wider than a regular model and sat on 19-inch bidirectional wheels adorned with Iron Man’s mask in the centre.

The LED headlights were inspired by the illuminated eyes of the Iron Man mask, while the fog lights bore the Stark Industries logo, and flashes of red on otherwise steel grey coloured body panels reinforced the inspiration.

The manufacturer said the styling of the special edition was led by “the strong, armoured appearance of the Iron Man suit, with its powerful lines echoing the sensual body of the comic and cinematic hero.”

It is not known how many of the design features from the one-off concept car will make it through to the production model.

Pebley Beach managing director Dominic Threlfall said: "Hyundai and Stark Industries are a natural fit, because they share values in embracing advanced technologies for the safety and comfort of their passengers – whether they are driving cars or wearing bullet-proof flight-enabling suits.

"The Kona SUV has already proved an enormous hit with our customers, and the arrival of the world's first all-electric SUV this summer means every customer can help save the world – even if it's just by cutting their carbon emissions."