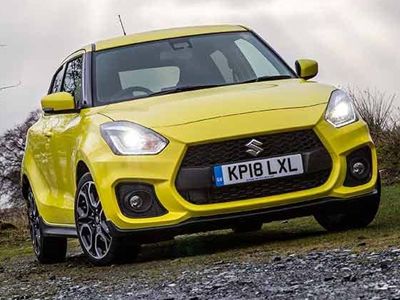 Sporty models put through their paces by Pebley Beach staff

Staff members at car dealership Pebley Beach in Swindon and Cirencester have been putting a couple of the dealership's sportiest models through their paces – all in the name of customer service.

When customers looking to buy the nippy Suzuki Swift Sport or powerful Hyundai i30N ask sales executives questions about the performance of the models, they can benefit from first-hand experience.

"We did laps with a professional driver at the wheel to see how the experts do it, before having a go ourselves," said Nick.

"Weaving in and out of the cones on the dynamics circuit was great fun, and I was genuinely impressed with the acceleration – at 2,500 to 3,000 RPM it pulls like a train.

"The new Swift Swift Sport is lighter than the previous model, benefits – for the first time – from a turbo, and the handling is even better. I think this is going to be a big hit with existing Swift Sport customers and those new to the model."

"There are pieces of technology like launch control and rev matching that are best experienced on the circuit," said Sean.

"I was particularly impressed at the way you could throw the i30N into the chicanes. While it is an awesome road car, the i30N is also designed to be raced, and track racing is covered as standard by the manufacturer's warranty, which is very unusual."

The N moniker stands for both Namyang - Hyundai Motor’s global R&D Centre in Korea where i30 N was born - and for the Nürburgring, home to Hyundai Motor’s European Test Centre where the i30N was further developed and tested.

Powered by a turbocharged 2.0 litre T-GDI engine, the i30N is capable of hitting 62mph in 6.1 seconds and reaching speeds of up to 155mph.

It has received rave reviews from the motoring press since arriving in the UK in January. Top Gear magazine said it was "dripping with the sort of details normally found in only the most serious performance cars," while Evo hailed it as "a thumping good hot hatchback; one that can absolutely stand comparison with the best."