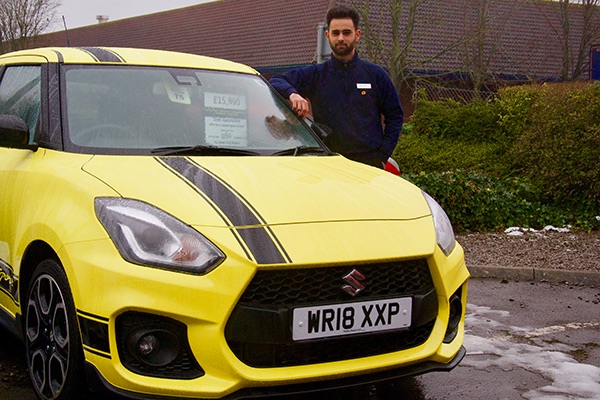 A car salesman has landed a job with a rival brand, after crossing the forecourts to buy a new vehicle.

Despite working for a rival car dealership Scott Albison (19), from Highworth, bought a new Suzuki Swift Sport from Swindon dealership Pebley Beach – and was so impressed with the level of customer service and the friendliness of the staff he decided to apply for a job there.

"I already owned a Suzuki Swift Sport – which is quick, affordable, and not too bad on the insurance for a young driver like me – and wanted a new one," said Scott.

"I walked from the dealership where I worked to Pebley Beach to make my purchase, and it occurred to me what a great place it would be to work. So when a job came up two months later I applied – and was successful!"

But the petrolhead always fancied selling cars for a living.

Now he'll be showing prospective buyers around the new range of Suzukis... although when he talks about a 'good little runner' it won't be clear if he's describing the car or himself – when he's not at work Scott enjoys road running and is training towards a half marathon.

* A high-resolution version of this image is available to download from https://www.flickr.com/photos/secretagentmarketing/47073524051/sizes/o/