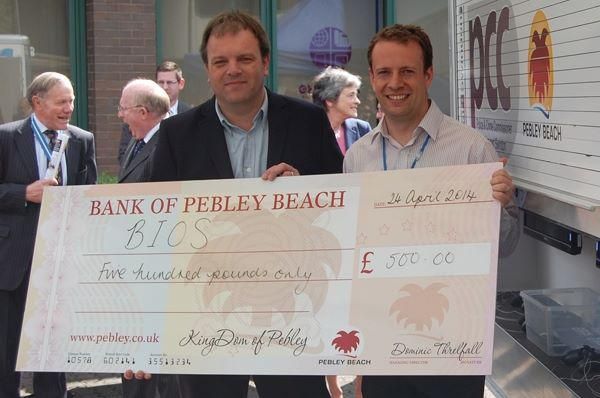 But this isn't a top-of-the-range Suzuki or Hyundai - Swindon motor dealer Pebley Beach have thrown their support behind the BIOS van: a mobile youth centre that will work with some of the town's most disadvantaged young people.

On Thursday, Pebley's managing director Dominic Threlfall was on hand to present a cheque for £500 to project leader and instigator Chris Priddy of the street-based youth work charity Bios - Settings for Life.

The donation also came with a promise of free servicing for the next two years.

The former builder's tipper truck is running 12 sessions a week the length and breadth of Swindon. Over 350 young people every week come to have fun, and they can speak to a youth worker - some of whom have fought their own battles with crime, drink, and drugs - about anything from health and social issues to future career prospects.

Pebley was one of around 50 Swindon companies who supported the van. Many firms chose to donate £20 in exchange for their logo to be drawn - graffiti-style - onto one side of the van.

Chris said: "The van has been an enormous hit with young people. The logos on the side give us the chance to talk to young people about career choices, and the opportunities that are available to them."

And Dom said: "As a company, we like to support young people. We were voted Apprenticeship Employer of the Year at this year's Wiltshire Business Awards, and 43 percent of our staff came to us as apprentices.

"Who knows, our next apprentice may be one of the young people helped by a visit from the BIOS van."

The official launch of the mobile youth centre - which was held at the headquarters of another major sponsor, Excalibur Communications - was a happy reunion for Dom and Chris, who last met at the Wiltshire Business of the Year Awards.

Chris won the award for Leadership and Social Influence while Pebley Beach was named Business of the Year.

Other supporters include T H White, who sourced the van, ISIS coach works, who carried out the conversion, SEQOL. TeeOne, Total Guide to Swindon, and Eyetrak.

The project was kick-started with a £63,500 grant from a £1m community fund established by Wiltshire's Police and Crime Commissioner to reduce crime and tackle anti-social behaviour.

Commissioner Angus Macpherson told delegates at the launch: "This was an early bid that set the tone of being a bit wacky. It's an idea I would like to see rolled out across Wiltshire."