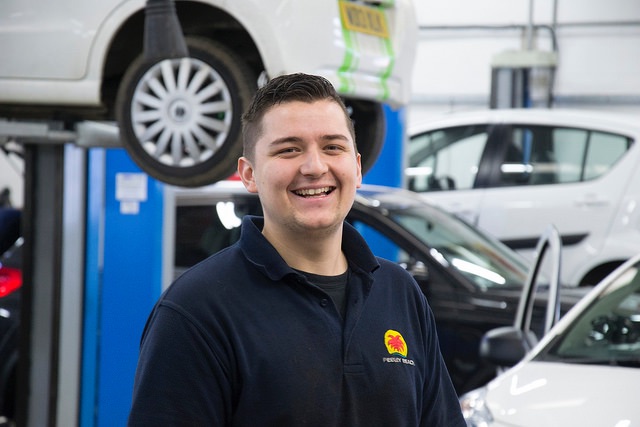 A technician at motor dealership Pebley Beach has been named Swindon College’s Motor Vehicle Apprentice of the Year.

Ryan Shorter (21) will be crowned at a ceremony in June after completing his final assessments six months early – but just 12 months ago he doubted he would ever finish his apprenticeship.

After starting his apprenticeship, Ryan gained placements with a number of independent garages, and although he enjoyed the work he was not able to gain the relevant experience to pass his modules.

“All the big jobs were given to senior technicians,” said Ryan. “I was never given the opportunity to try the complicated jobs, which is what I needed to do to pass my qualifications.”

In August, Ryan joined Pebley Beach, the 2014 Wiltshire Apprentice Employer of the Year. Under the watchful eye of master technicians Martyn Owen and Mark Illsley, Ryan sped through all his assessments – finishing six months early.

“I’m really grateful for all the support Pebley Beach have given me,” said Ryan. “Two years ago I was told I’d never pass my second year. Now I’ve completed my third and final year and I’m looking forward to getting my certificates and becoming a fully qualified technician.”

Pebley Beach MD Dominic Threlfall said: “Ryan is a really valuable member of the team and has done fantastically well – he just needed the right support. We’ll continue to develop his skills by putting him through the Suzuki and Hyundai training academies.”

Dom, who is a Swindon Borough Council apprenticeship ambassador, said: “Apprenticeships are an excellent way of home-growing your own talent.

“There’s a lot of help and support available to businesses that want to take on an apprentice, and financial incentives too.”