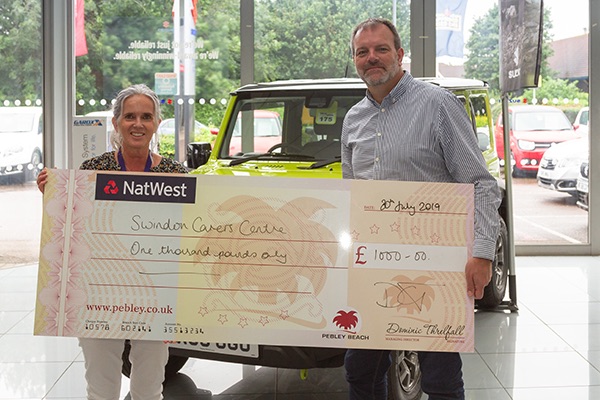 A charity that supports around 4,000 unpaid carers in Swindon has raised more than £2,100 from a sponsored walk, after receiving the backing of Pebley Beach. MD Dominic Threlfall pledged to match every pound raised by Swindon Carers Centre’s Walk A Mile In My Shoes sponsored walk up to £1,000.

Spurred on by the company’s support, participants in the Walk A Mile In My Shoes raised £1,100 in sponsorship and donations.

With Pebley’s £1,000, the total stands at £2,100. Schools development officer Ann Giles, visited the Pebley Beach dealership in Paddington Drive, Swindon to pick up a giant cheque.

“The support of Pebley Beach means so much to us,” she said. The money will be used to fund breaks and activities for some of the 4,000 unpaid carers supported by the charity, whose ages range from between five and 96.