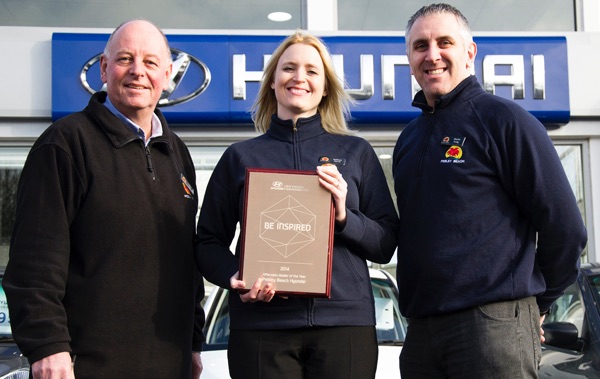 Swindon motor dealer Pebley Beach has been named Aftersales Dealer of the Year by Hyundai UK.

The dealership was awarded the accolade in recognition of its high levels of customer satisfaction, staff training, and leadership.

The award was made at the Hyundai UK national conference at the Stadium MK in Milton Keynes  – home to the Dons football club – earlier this month (January).

Pebley saw off competition from 166 other dealerships to scoop the award.

Presenting the award, Nick Tunnell, aftersales director at Hyundai UK, said: "I'd like to shine a spotlight on someone who has performed brilliantly across the parts, the service, and the people areas of their business."

Managing director Dominic Threlfall explained: “Aftersales is really important to us. Buying a car at Pebley Beach is just the beginning of the customer’s relationship with Pebley Beach.

“The experience they have when they bring their car back for a service or MoT is vital to growing our reputation, and is one of the reasons customers come back to us for their next car time after time.”

Although the award was presented in January, it recognises the achievements of the aftersales team during 2014.

“This is the last accolade of a bumper year for us: one that has seen Pebley Beach named Wiltshire Business of the Year and UK Garage of the Year, and pick up an Excellence in Aftersales award at the AM Awards,” said Dom.

“The judges will also be aware that we have more Hyundai master technicians than any other UK dealership, and that service specialist Lloyd Pickup has been named one of Hyundai’s top UK brand ambassadors for 2014.”

Video link to the presentation.