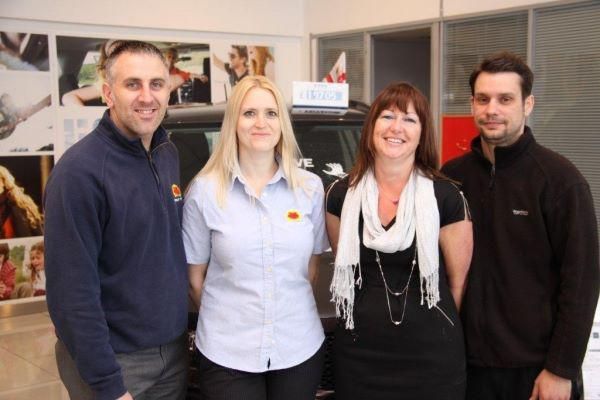 Pebley Beach gets into gear for charity

Staff at Pebley Beach have completed a hat-trick of charity challenges and raised over £1,350 for good causes.

Congenital Melanocytic Naevi are large birthmarks which can cover most of the body and may affect brain development. Although Harvey is only mildly affected, it means his skin is much thinner than it should be and so he has to be careful in the sun and if he falls or knocks himself.

To raise money for the charity - which doesn't receive funding from the Government and relies on fundraising - Harvey had his shoulder-length lockscut for the very first time. Now sporting a cropped, spiky hair style, Harvey and Martin have helped lots of other children affected by CMN.

John, who lives in Toothill, completed the Castles Bike Ride - a 28 mile long cycle ride across the Ridgeway. The course, which followed the ancient tracks, byways and bridleways across the Marlborough Downs, took 2 hours 37 minutes for John to complete in the rain and he has so far raised £180 for Macmillan Cancer Care.

Kathryn and Helen joined the 3,000 other women in Swindon on Saturday running in the Race for Life for Cancer Research UK. Helen, who lives in Cricklade, completed the five kilometre course in 45 minutes and has raised almost £200.

""Everyone at Pebley is very involved with the community and we collectively aim to help others and challenge ourselves at the same time.""