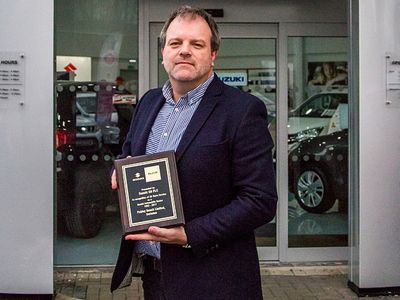 Pebley Beach was established in 1976 and started selling Lancia cars in 1984. In 1993 the company became the Swindon franchise holder for Suzuki, initially selling from their site at Wroughton and opening a second dealership in Cirencester in 2001.

The affordable SUV, the Grand Vitara, soon become a common sight in the villages of the Cotswolds and north Wiltshire – even lords and ladies were spotted behind the wheel.

The Grand Vitara's baby brother, the Suzuki Jimny, also proved a hit with local motorists, as did the popular supermini the Suzuki Swift.

Over the years the lineup has been joined by the Baleno sedan, which first appeared in 1995 and was relaunched as a five-door hatchback in 2015; the subcompact Ignis in 2000; the compact crossover S-Cross in 2006; and the Celerio, launched into the city car market in 2014.

"We've really enjoyed our long association with Suzuki GB," said Dominic. "They are very friendly and operating with them feels more like working within a family business than holding a franchise.

"The brand also inspires tremendous loyalty with customers – something that we try to replicate.

"Suzuki drivers like the affordability and reliability of the brand, and as Pebley Beach customers they enjoy award-winning after sales service."