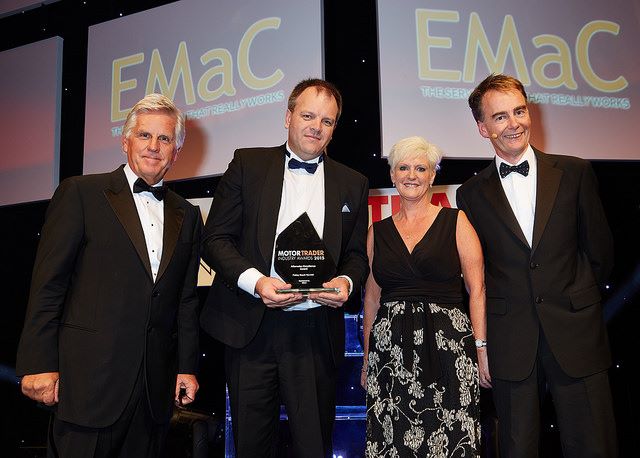 Motor dealer Pebley Beach has become the first recipient of an award that recognises exemplary service in aftersales.

The Swindon company was presented with the Aftersales Excellence Award at the prestigious Motor Trader Awards at London’s Grosvenor House Hotel last week, seeing off competition from other high profile national dealers and franchises.

The Award came just a week after Pebley Beach was named one of the 11 most trusted garages in the UK at the Motorcodes Awards.

Managing director Dominic Threfall said: “We’re delighted to have won a plaudit at the Motor Trader Awards, and particularly pleased that it was in the aftersales category, after winning a similar award from Automotive Management earlier this year, for our industry it is like winning a Golden Globe and an Oscar.

“Aftersales – servicing, MoTs and repairs for all makes and models of cars – is an area of the business we pride ourselves on: that’s why we’ve been voted one of the most trusted garages in the UK by our customers for the second year in a row.”

Pebley Beach operates Suzuki and Hyundai franchises from its showroom at Paddington Drive, and UK bosses from both the automotive giants were quick to garner praise on the company.

Dale Wyatt, director of sales and marketing at Suzuki, said: “You should feel rightfully proud that your aftersales excellence is recognised by your industry peers,” while Tony Whitehorn, president and CEO of Hyundai Motor UK Ltd said: “To be recognised at both the AM and the Motor Trader Award ceremonies is a real testament to you and your team. Well done; I’m seriously impressed.”