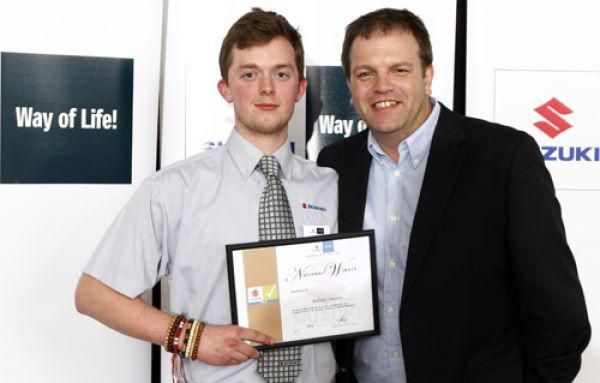 Nathan, 21, from Cheney Manor, is in his third and final year of his Technician Apprenticeship with Suzuki and Pebley Beach.

To claim the title of Third Year Technician Apprentice of the Year, Nathan was up against the rest of his intake year at Suzuki's training academy. He then went head to head with two other Suzuki apprentices, who were all nominated for their excellent exam results, quality of work, portfolio progress and overall attitude.

The three finalists were given three practical tasks to complete - diagnosing a problem with an engine, a full calibrated brake inspection and a valve clearance. For each problem the apprentices were judged on their technical and mechanical knowledge, success in diagnosing problems, how they used Suzuki's computer system and following instructions.

Nathan was crowned the winner of the competition due to his 'sound understanding of the job and logical approach' and because he 'approached the job like a time-served technician with a clear understanding of process.'

Nathan said: "I didn't expect to get through to the practical side of the competition, so was surprised when I found out. It was definitely an exciting day and I enjoyed the tasks as well as meeting lots of people from across Suzuki.

"I chose an apprenticeship as I wanted to get a trade, a decent job and qualifications at the same time as earning. I always knew a hands-on training route would suit me better than going to university and that there's always going to be a need for mechanics.

"Pebley Beach was also always my first choice employer for my apprenticeship as the team is really friendly, everyone is recognized as a valuable member of the team and we all feel important to the company - I've found this to be the same approach at Suzuki as well."

Nathan's apprenticeship was three years and involved block placements at Suzuki's state of the art training academy in Ruddington.

Pebley Beach currently employs ten apprentices at both their Swindon and Cirencester dealerships. This is also the fifth time that a Pebley Beach apprentice has won the title of Apprentice of the Year.

Managing director of Pebley Beach, Dom Threlfall, said: "Our apprentices are known for their skill and dedication, which is why we've got such a good track record in winning these top accolades.

"Nathan has a very promising future and we're very pleased to have him on board and as a permanent member of the team once he's completed his course later this year."