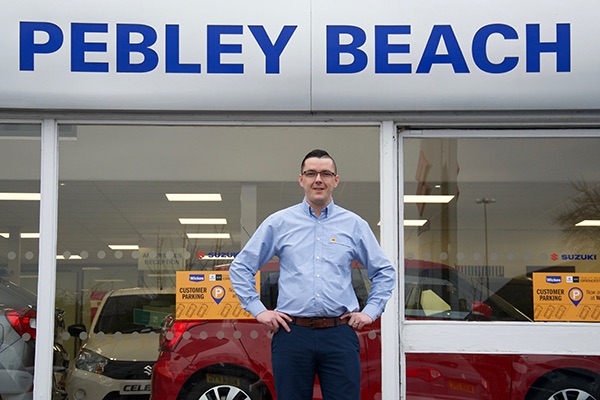 For a new recruit at motor dealer Pebley Beach, selling cars is in the blood – in fact, Robert Sim has been doing it for more than half his life.

Honing his craft at his father's independent garage in Stroud, Robert (33) started selling cars at the age of 16 – a year before he was old enough to take his driving test.

"People were buying cars from a salesman who wasn't old enough to drive on a public highway," says Robert. "I got a real taste for it, and I still love selling cars today."

Robert spent the next 17 years working for motor dealers in and around Gloucester, before leaving a large multi-franchise dealership to take up the sales manager position at Suzuki dealership Pebley Beach in Cirencester.

"There's a refreshing culture at Pebley Beach, with an enthusiastic and dedicated team," says Robert, who joined the company shortly before Christmas.

"What I have found is that Pebley beach customers are incredibly loyal – both to the Suzuki marque, and to Pebley Beach itself. And that has a lot to do with Pebley's reputation for excellent customer service."

Robert attended Archway School in Stroud before embarking on his career in the motor trade. Today, he lives in Stonehouse with his wife Kirsty and children Kaitlyn (11), Chloe (7), Ellie-May (5), Megan (3) and Riley (2).