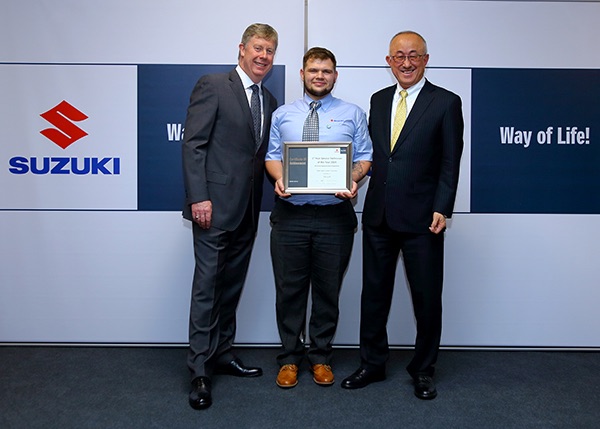 Jai Gill (19) won the Suzuki Apprentice of the Year accolade for his achievements during his first year of a three-year apprenticeship.

His achievements were recognised at an awards ceremony Suzuki's headquarters in Milton Keynes in what was a double night of celebration for Pebley Beach, as former Apprentice of the Year finalist Arron Smith – who started his career as an apprentice in 2005, and is based at the firm’s Swindon dealership – was named one of the top six Suzuki apprentices in the UK.

After a footballing injury scuppered his chances of joining the Army as a motor mechanic, Jai worked as a pallbearer for a firm of undertakers before joining the Suzuki dealership in August 2017.

The former Deer Park School pupil underwent constant assessment during his first year, and every two months would spend a week in a classroom environment at Suzuki's training centre in Doncaster.

"We were assessed on all kinds of things, from giving a vehicle a visual health check to manual work like drilling and riveting," said Jai.

"We were marked on the tasks we'd done during the year, and I think that's where I picked up points.

"Pebley Beach is such a supportive environment, and the team are keen for me to work on all aspects of motor maintenance – under strict supervision, of course. I learnt so much in my first year."

Pebley Beach's workshop maintains, services and MoTs any make or model of car – giving Jai experience in working with a wide range of marques.

His favourite part of the job is diagnosis. "I like helping motorists who come in with a problem, identifying the fault, and fixing their car for them,' said Jai.

And the youngster has set himself high standards: "I'm in year two of my apprenticeship now, and after year three I can work towards becoming a fully qualified technician and, eventually, a master technician."

Managing director Dominic Threlfall said: "We had high hopes for Jai and we're delighted that he has done so well in his first year. We look forward to more successes in years to come.

"If he can be half as good as Arron that’s classified as a result.”

"Arron joins a number of other Pebley Beach staff recognised as being among the highest qualified in the country.

"I've been an advocate of quality apprenticeships for as long as I've been in business, and the recognition of Jai, Arron and other members of the team prove that investing in apprenticeships can provide an employer with excellent fully-qualified staff for the long term."