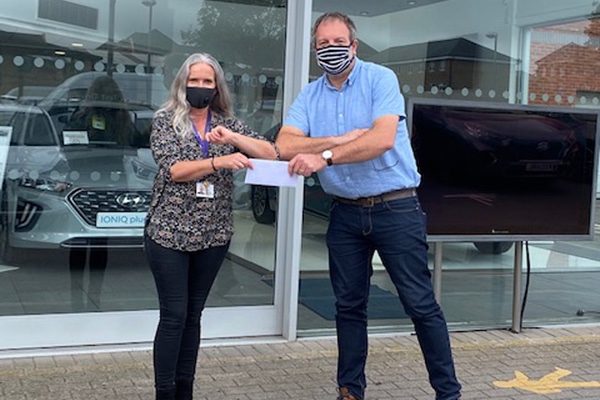 For five years, the Hyundai and Suzuki car dealership has match-funded the money raised by the charity's activities during Carers Week to the tune of £1,000.

But with pandemic restrictions making mass gatherings like the charity's Walk a Mile initiative – a sponsored walk around the centre of Swindon – impossible, Pebley Beach MD Dominic Threlfall decided to donate the entire £1,000.

Swindon Carers Centre had a packed programme during Carers Week, which ran from June 7 to 13, with a focus on sharing the stories of individual carers on its social media channels and on BBC Radio Wiltshire, which interviewed a carer a day throughout the week.

Elsewhere the charity's Singing for Everyone Choir, made up of carers, launched a new video and song, written by choir leader Sarah Summers. The song can be enjoyed on YouTube at  https://www.youtube.com/watch?v=o3voTSfdf0Q

And supporters were able to participate in a socially-distanced Walk A Mile event in their own gardens or local parks.

Swindon Carers Centre exists to offer support to the 21,000 unpaid carers in Swindon who look after a loved one – this could be a spouse or partner, son or daughter, sibling, parent, or other relative. Carers range in age from children as young as five to carers in their 90s.

Susanna Jones, CEO at Swindon Carers Centre, said: "The Covid-19 pandemic has been an extremely challenging period for unpaid carers. Despite this, they continue to support relatives or friends who would not otherwise cope without their care.

"We are very grateful to Dominic Threlfall, and the team at Pebley Beach, for their commitment to support unpaid carers in our community by match-funding our Walk A Mile event for another year.

"These funds will make a huge difference in our work to ensure people can lead a healthy, fulfilling life alongside their caring role - at a time when demand for increased support and advice is particularly high."

Pebley Beach managing director Dominic Threlfall said: "We're delighted to be able to support Swindon Carers again this year. Well done to everyone who helped raise so much money in extremely challenging circumstances."

The firm is an active supporter of local carers and earlier this year sponsored the Dementia Carer Award at the Wiltshire Health & Social Care Awards.