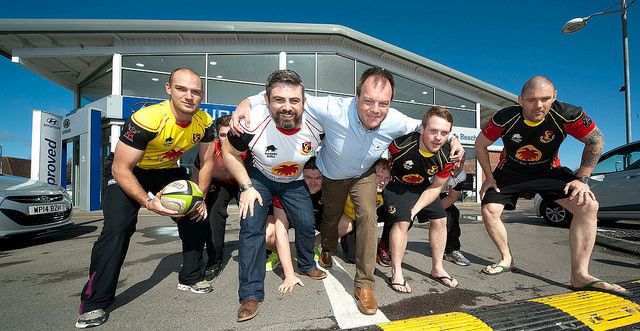 Motor dealer gives rugby club a boost, gets one back

Swindon motor dealer Pebley Beach gave a Swindon rugby club a boost at the weekend – and its boss got one back in return.

The Suzuki and Hyundai dealership announced a major sponsorship deal with Swindon College Old Boys. And after posing for the obligatory shirt hand-over pictures, Pebley’s MD, Dominic Threlfall, was roped into a scrum and hoisted skywards in a mock line-out.

The Old Boys have enjoyed a remarkable season, being promoted to the Southern County North 1st division, and coming within a hair’s breadth of a cup final place at Twickenham.

Yet the grassroots club currently has no clubhouse – home is the Kings Hotel in Old Town – and they play at the the Nationwide Building Society stadium.

But a new ground at Wichelstowe is on the near horizon, and recent promotion means the sponsorship deal is more important than ever, according to club chairman Darren Astley.

“This is huge for us,” he said. “The investment being put into the club by Pebley Beach is very welcome.”

For Pebley Beach, the deal means the company logo emblazoned on the shirts of yet another local sports team, but also the opportunity to support another of the town’s key clubs.

“We’re excited to be involved with Swindon College Old Boys at this exciting time, and wish them all the best in the forthcoming season.”