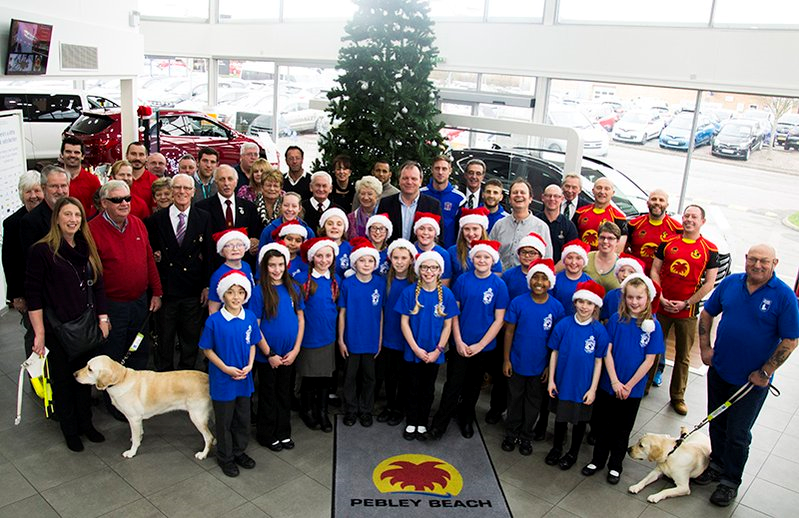 It’s beginning to look a lot like Christmas at Swindon motor dealer Pebley Beach, where a choir joined sports stars and community stalwarts to sing carols around the tree.

Twenty-two children from nearby Robert Le Kyng School led guests in song at the Suzuki and Hyundai car dealership at a special event on Friday (December 4) to celebrate the achievements of the community organisations that the firm supports.

Pebley Beach’s relationship with Robert Le Kyng School goes back to the beginning of 2013, when it sponsored a road safety awareness campaign and provided every child with a high-visibility vest.

Since then, the firm has been involved with a number of initiatives at its closest school: helping to maintain the school minibus and sponsoring smart new tops for the school choir.

The children performed a mix of traditional carols and modern songs, including Once in Royal David’s City, Away in a Manger, A Winter's Tale, and Walking in the Air from The Snowman.

And the Year 5 and 6 pupils led a packed showroom in a rendition of Silent Night.

Swindon Town captain Nathan Thomspson said afterwards: “It was fantastic to see the kids perform; it’s put me in the Christmas spirit.”

Supermarine chairman Jez Webb spoke of the importance of Pebley Beach’s sponsorship of the club: “It means a lot,” he said. “In the winter we have to budget for fleeces and training tops. The support of Pebley Beach is massively important for us.”

Pebley Beach MD Dominic Threlfall said: “Christmas is about spending time with friends, and we are privileged to work with a number of fantastic community organisations in Swindon, so we thought we’d invite them all round for a get-together.

“It’s put everyone in a very Christmassy mood.”

A video of the event can be viewed at www.youtube.com/watch?v=hyB9E2mFloI