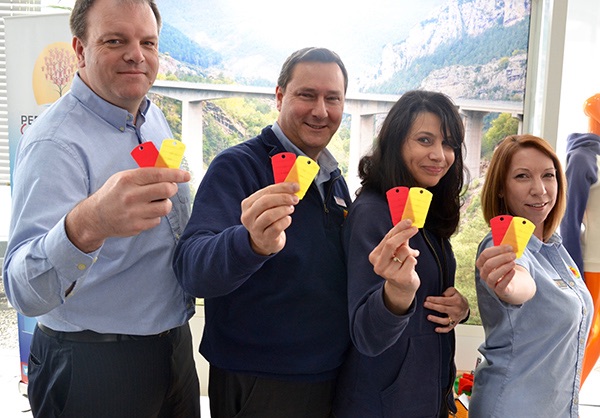 Initiative to tackle banter and swearing hailed a huge success

A year after hitting national headlines with an innovative initiative to tackle banter and swearing in the workplace, Swindon motor dealer Pebley Beach says the scheme has been a massive success.

In February 2015, managing director Dominic Threlfall issued every member of staff with football referee-style red and yellow cards, which staff members could pull out if colleagues’ banter went too far.

The aim of the initiative was to reduce sarcasm and swearing, especially in the workshop where young male technicians sometimes forgot their banter and colourful language could be overheard by members of the public.

“I’m proud of the supportive culture we foster here,” said Dom at the time. “I don’t mind a bit of banter, but I want team members to think about the language they use towards each other, and how people feel when they are the butt of jokes – however well intentioned.”

Twelve months on, the scheme is still in full force, and every new member of staff is issued with their own set of red and yellow cards. But the cards don’t come out as often as they used to.

On BBC Wiltshire’s Ian Langdon show, Dom was invited to review the initiative as part of the Throwback Thursday segment.

He encouraged other firms to replicate the initiative, which he described as cheap, simple, fun, and effective.