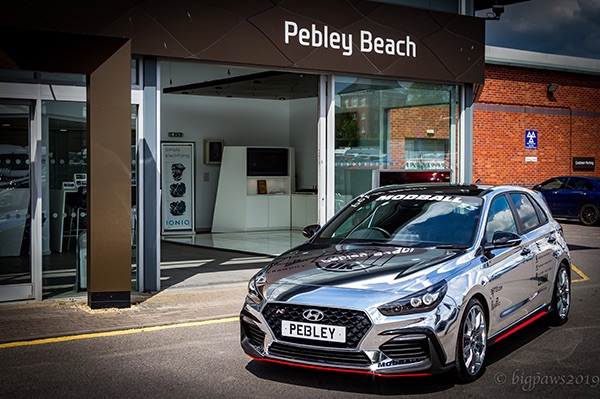 A Hyundai i30N from Swindon motor dealer Pebley Beach joined the starting grid along with Lamborghinis, Porsches and Ferraris at the 2019 Modball UK Rally over the bank holiday weekend.

The stunning chrome-wrapped Hyundai hot hatch set off among the supercars from the O2 Arena in London, driving to Blenheim Palace in Oxfordshire before heading north to Edinburgh.

The Modball Rally always attracts thousands of spectators at the start and finish lines. It has been running for 12 years in America, Australia and through Europe from London to Ibiza, but this is the first rally around the UK.

Starting on Friday (May 3) three stages take the competitors from London to Edinburgh, Edinburgh to Cardiff, and Cardiff to London.

Unlike the 1980s movie Cannonball Run, starring Burt Reynolds, the Modball Rally is not a race. Drivers must comply with all UK road laws, including speed limits. There is no official timekeeping, and no prize for being fastest.

Instead, two-man teams – who travel from all over the world to take part – accrue points along the way, and enjoy stops in five-star hotels.

The cars must be modified – lending the event its Mod moniker – and the Hyundai was fitted with approved body mouldings and accessories including alloys and trim – before being chrome-wrapped by Smart Design Graphics in Swindon.

The Hyundai was driven and co-driven by brothers Harry and Ben Threlfall, who are part of the team at Pebley Beach.

"The first stage of Modball UK was incredible," said Harry on his return to Swindon. "There was a mix of cars ranging from £200,000 and up, to more humble vehicles such as our Hyundai i30N.

"Every car brought something different to the table, whether it was a loud exhaust or a bold wrap  – or both in our case!

"The whole weekend was brilliant, from meeting the other Modballers at the start line in London, to meeting car fanatics at Blenheim Palace for the checkpoint and the finish line in Edinburgh.

"I couldn't have asked for a better car for the job, and my brother Ben wasn't a bad co-driver either. Bring on the second leg in July."

Pebley's £25,000 i30N is the first in a new line of high-performance road cars to launch under the Hyundai N sub-brand. The N stands for Namyang in Korea, where the car was developed, and Nürburgring in Germany, the famous track where it was tested and honed.

From July 12 to 14 the cars will drive from Edinburgh to London. And the return trip from Cardiff to the capital takes place from September 6 to 8.