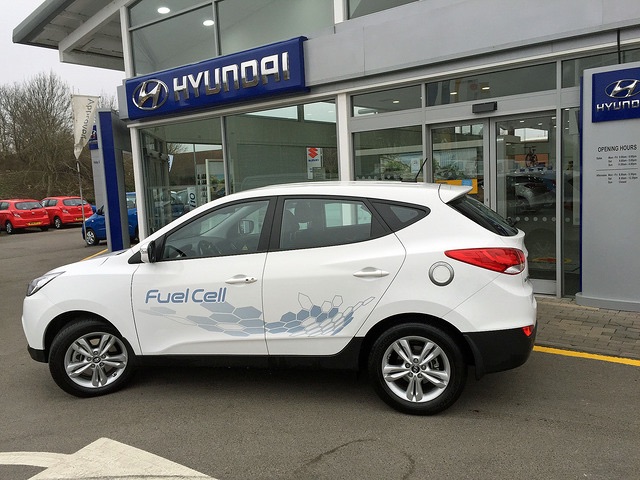 A specially-adapted ix35 powered by hydrogen fuel cells completed a record-breaking 6,096-mile unbroken trip around the M25 during UK Hydrogen Week, stopping only to refuel.

It also travelled 400 miles on a single tank of hydrogen – further than any other fuel cell vehicle had ever travelled.

The news has been welcomed by Pebley Beach, which later this year will become one of the first centres in the UK to offer servicing on fuel cell vehicles.

Korean manufacturer Hyundai was first off the blocks in producing a a car powered by hydrogen.

And Pebley Beach has been fielding enquiries from businesses and organisations keen to get their hands on a hydrogen-powered car – especially after the records were broken.

“As a Hyundai workshop with three master technicians – the highest qualification a mechanic can achieve – we’re delighted to have been chosen as one of the UK’s first hydrogen centres.”

Under the bonnet of the specially-designed iX35 the hydrogen fuel cells power a 134bhp electric motor that drives the front wheels of the five-seat SUV.

At the rear of the car, the tail pipe emits nothing except water vapour.

The 5.6kg hydrogen tank provides enough fuel for a trip of at least 300 miles. In the future, drivers will be able to refuel at a filling station, as they do with petrol and diesel cars.

“Although we can’t reveal the on-the-road price right now, it will be an economical price for a highly technical futuristic car,” promised Dom.

Right now there are only a handful of hydrogen filling stations in the UK – and one is in Swindon, at the Honda’s South Marston plant, with a second station due to come online by the end of 2016 at Junction 16 of the M4.

In fact, Swindon is becoming a centre for Hydrogen technology.

Johnson Matthey Fuel Cells, a global business dedicated to the supply of high quality fuel cell components, opened in the town in 2003.

And Swindon Borough Council has formed the Swindon Hydrogen Hub, a forum of businesses – including Pebley Beach – working together to ensure Swindon’s place at the centre of the hydrogen revolution.