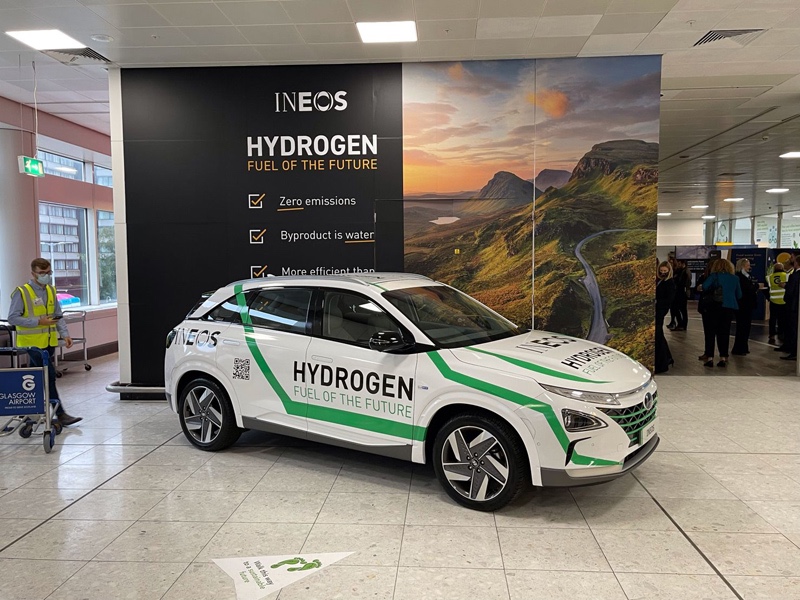 Hydrogen car from Swindon takes pride of place at COP26

World leaders at the United Nations Climate Change Conference will have the opportunity to look over a hydrogen-powered car supplied by Swindon motor dealer Pebley Beach before they leave the host city of Glasgow.

A hydrogen-powered Hyundai Nexo takes pride of place in the departures lounge at Glasgow Airport, allowing delegates to find out more about hydrogen power while waiting to board their planes home.

The Hyundai Nexo was supplied by Pebley to British chemicals giant Ineos, which last year launched a clean hydrogen business to accelerate its own drive towards net zero carbon emissions. The firm has struck a branding deal with Glasgow Airport to have its name all over the terminal.

The car was wrapped in Ineos branding by another Swindon company – Smart Designs – before being driven to Glasgow for the global conference.

The SUV, which emits nothing more harmful than water, is fitted with an advanced air purification system that actually cleans the air as it drives –  removing 99.9 percent of particles from the air around it.

"This will be an excellent opportunity to discuss hydrogen-powered motoring with policy-makers from around the world – including those from the UK," said Dominic Threlfall, managing director of Pebley Beach.

"It is also a good opportunity to promote Swindon's place at the forefront of the UK's hydrogen revolution.

"Hopefully the world leaders will wake up to how important hydrogen will be in helping all nations to hit their carbon reduction targets. Hydrogen power is not the only solution, but it is an important part of the mobility mix.

"We’re very lucky with Hyundai as a partner, leading the way with not only hydrogen, but also electric vehicles."

Earlier this month prime minister Boris Johnson took got into the driver's seat of the Nexo, which was on display at the Conservative Party Conference in Manchester.

Pebley Beach is the phase 1 distributor of the Nexo for Hyundai UK.