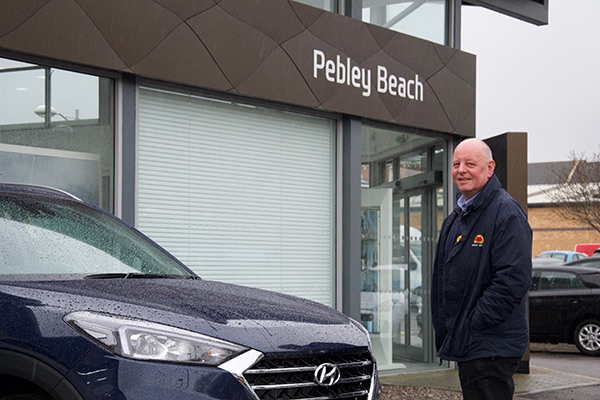 How's that for a service? Employee clocks up 20 years with Pebley Beach

An employee at Swindon motor dealership Pebley Beach has clocked up 20 years.

Steve's relationship with the family business goes back to the 1980s, when he managed four Swindon petrol stations for Roger Threlfall, before leaving to run his own franchise – Shell Oasis on Great Western Way.

When Dominic Threlfall joined Pebley Beach's predominately petrol forecourt business, Steve was tasked with training him in all things 'forecourts and shops'.

As managing director, Dom changed the company’s focus to cars and workshops, and he was able to repay the favour by employing Steve as a parts manager.

"The principles of stock management remain the same for oil filters and Mars bars, so we hit the ground running," said Dom.

Steve recalled: "I came in as parts manager on April 1, 1999 and built the parts department as the business expanded – first with the opening of the Cirencester branch, then with the acquisition of Swindon Hyundai."

He has trained a number of apprentices including his protégé Luke Rapley, who joined the firm as an apprentice and was promoted to parts manager last year, after five years in the department, as Steve was looking to gear down.

Steve, who now works in a customer liaison role, said: "I've really enjoyed my first 20 years at Pebley Beach – the time has flown by.

"It's like a big family here – everyone is so supportive of each other. I'm proud of the department I helped to build, and glad that my younger colleagues can benefit from my experience."

* A high-resolution version of this image can be downloaded at: https://www.flickr.com/photos/secretagentmarketing/46444879125/sizes/o/