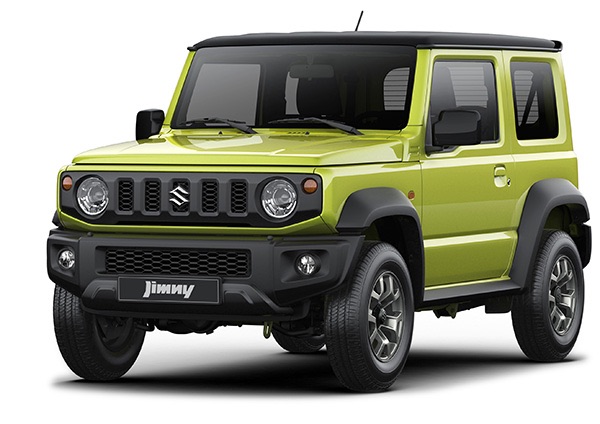 With car manufacturers adopting sleek lines and aerodynamics, Suzuki surprised the industry this year by unveiling a boxier version of its popular small SUV, the Jimny.

The angular body is reminiscent of the discontinued Land Rover Defender or the equally chunky Mercedes G-Wagen.

And its fair to say that squared corners like the ones on the fourth generation Jimny have not been in vogue since Huey Lewis and the News topped the charts with Hip to Be Square back in 1986.

More surprisingly, the off-roader has proved a hit with younger drivers who were not even born when Huey dominated the airwaves and the UK's then-niche SUV market consisted of rugged workhorses.

And the colour? A greenish-yellow hue called Kinetic Yellow.

"The on-the-road price hasn't even been published yet, and we're already getting pre-orders," said Pebley Beach managing director Dominic Threlfall.

"In fact, we've got one company that wants ten of them to customise. They'll be adding bigger wheels, and lots of chrome, and selling them at a profit.

"What's really taken us by surprise is the interest among young urban drivers. Suzuki has been pushing the new Jimny's excellent off-road ability – with low range gearbox and Hill Descent Control – but it looks likely that the model will be seen on the streets of Swindon, as well as the fields around.

"Younger drivers want something that helps them stand out from the crowd. The new Jimny does that – just as the Fiat 500 did when it relaunched in 2007."

Motoring magazines have been quick to embrace the model's quirkiness, with Auto Express saying the "cute off-roader" is "destined for cult status" while Top Gear said: "You just can’t separate the sheer joy of the way this rascal looks from the way it drives, and that irrepressible cute-meets-tough joy is what will make it ultimately a little cracker to live with."

A high-resolution version of this image is available at https://www.flickr.com/photos/secretagentmarketing/31745071878/sizes/o/