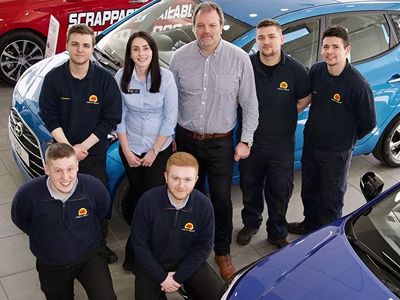 Get the senior staff you want with apprenticeships, says motor dealer

Employers should hire apprentices to get their perfect senior team of the future, a Swindon motor dealer has said.

Dominic Threlfall of Hyundai and Suzuki dealership Pebley Beach – who was named Wiltshire Apprentice Employer of the Year in 2014 – used National Apprenticeship Week (March 5 to 9) to reinforce his support for the scheme.

"I'm passionate about apprenticeships," said Dom. "In fact, I've built a business on them – we've always had a 'homegrown' philosophy at Pebley Beach."

In Swindon, Natalie Bristow works as a business administrator, Lewis Witherington is a technician, and Ryan Thomson works in the parts department.

In Cirencester, Jai Gill and Luke Chappel work as technicians.

And Pebley Beach apprentices have achieved great things: vehicle technician Arron Smith was recognised in the UK Apprentice Technician of the Year competition while fellow technician Ryan Shorter was named Motor Vehicle Apprentice of the Year at Swindon College.

Luke Rapley was promoted to parts manager just five years after being taken on as an apprentice, while Mark Illsley qualified as a master technician and was named Suzuki Technician of the Year in 2015.