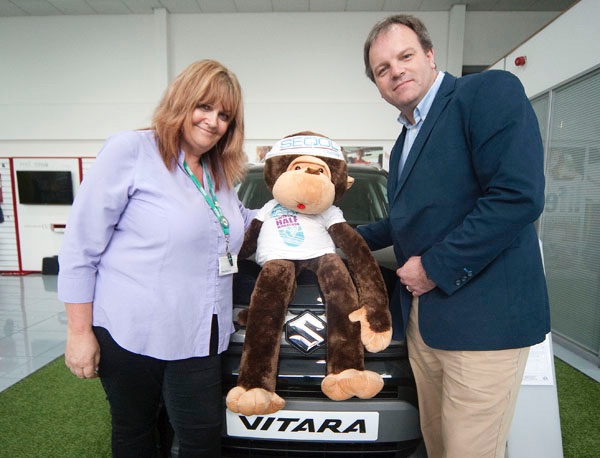 When hundreds of runners hit the streets in Sunday’s Swindon half marathon, they’ll be doing so behind one of the most fuel-efficient SUVs on the road.

Runners on the 13.1 mile route – which unusually for a road race wends through urban streets and picturesque countryside – will be lead by a Suzuki Vitara supplied by motor dealer Pebley Beach.

And with fuel economy of 70.6mpg the race car – unlike the runners – won’t have to stop for a drink en route. In fact, the economic soft-roader could do the race five-and-a-half times on just one gallon of petrol – or 56 times on a full tank.

Dominic Threlfall, managing director of Pebley Beach, said: “SUVs used to have a reputation for being fuel inefficient.

“The good news is that drivers of the new Vitara – which was launched earlier this year – can expect a 729-mile range from the 1.6-litre turbo diesel, with an official fuel economy measure of 70.6mpg.”

The Vitara also offers some of the most generous boot space in the small crossover class: 375 litres, or 710 litres with the back seats down – more than even space to carry an entire running club’s running shoes, shorts and vests.

And with climate control and cruise control as standard across the range, runners who already own a Vitara are guaranteed a cool and comfortable drive home.

Swindon half marathon starts at 10.30am on Sunday, October 11, starting at Piper’s Way near Nationwide HQ. The event also includes a five-mile multi-terrain run and two-mile fun run. Places are still available at www.swindonhalfmarathon.org.uk