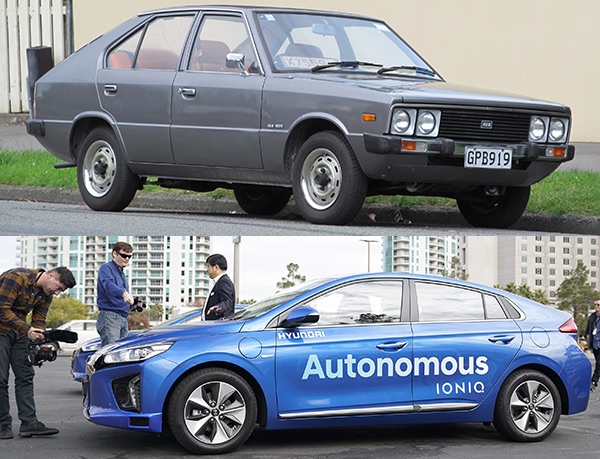 Glasses are being raised at Swindon motor dealer Pebley Beach this week, following the news that Hyundai has become the fourth largest vehicle manufacturer in the world, as it prepares to celebrate its 50th anniversary.

Hyundai replaced Vauxhall / General Motors, which has slipped to sixth place behind Renault-Nissan. Honda Motor Group sits at the number one spot, followed by Fiat-Chrysler and Ford Motor.

To mark the achievement, here are 15 things you probably didn’t know about Hyundai motors:

1. Hyundai will celebrate its 50th anniversary this year – it was established on December 29, 1967.

4. Hyundai vehicles are sold in 193 countries through more than 5,000 dealerships and showrooms.

5. Hyundai’s first car was the Cortina, built under license from Ford.

6. A Brit was in charge of the company’s early successes – George Turnbull was hired from British Leyland as vice president and director in 1974.

13. In 2014 Hyundai’s hydrogen fuel cell ix35 broke the record for the longest ever journey in a hydrogen vehicle – 700km.

14. The development of clean fuel technology remains a primary focus for the brand. In 2017 Hyundai launched the Ioniq: the world’s first car offering three electrified powertrains: hybrid, electric, and plug-in.

15. Hyundai launched its first driverless car, the Autonomous Ioniq, at the Consumer Electronics and Consumer Technology Show in Las Vegas in January this year.