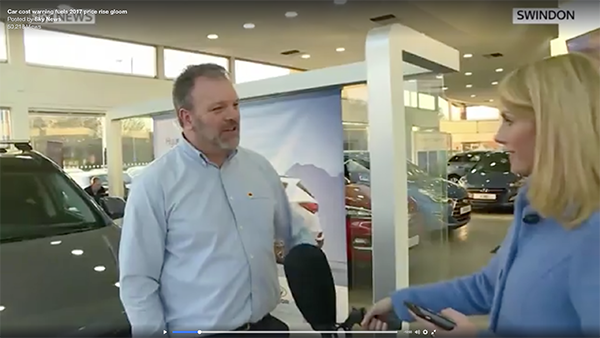 Car dealership Pebley Beach is experiencing a rush of budget-conscious customers hoping to save hundreds of pounds before a double-whammy of car cost increases.

The increase in the price of automobiles follows the slump in the value of the Pound following last summer’s Brexit vote.

The low Pound makes imports – everything from clothes to food – more expensive for British consumers.

Meanwhile, motorists who buy before April will also save money on their road tax. Most models sold by Pebley Beach currently cost their customers nothing or very little in Vehicle Excise Duty.

But a government shake-up means tax discs will go up in the new financial year.

Pebley Beach MD Dominic Threlfall was on Sky News last week to explain the causes of the increases to reporter Rebecca Williams.

The interview was broadcast live on Sky News, and on Facebook Live, which enabled viewers to pose their own questions to Dom in real time.

Many viewers asked whether high import tariffs would be a boon to British manufacturers.

But Dom responded that even cars assembled in Great Britain – like Swindon’s Honda, Oxford’s Mini, or Sunderland’s Nissan – are being affected by the cost of parts, many of which are imported from abroad.

“In the mass market, there’s no such thing as a purely British car,” he said.

The anticipated price increase has not yet reached Pebley Beach, which is the franchise holder for Hyundai and Suzuki in the Swindon area, although other marques were already putting up their prices.

However, the blow might be softened as 80 percent of consumers buy their vehicles on a rental / purchase plan, rather than outright, which means small increases to monthly payments, rather than a bigger lump sum at the point of purchase.

And while no-one – even Dom – knows when the price of Hyundais and Suzukis will go up, the increase in road tax does have a definite date.

The changes were brought in by former Chancellor of the Exchequer, George Osbourne, as a response to falling CO2 emissions from new cars.

Vehicle Excise Duty was based on emissions – and manufacturers had become so good at producing low-emission cars that most new car owners paid no tax at all, costing the Treasury millions of pounds every year.

So from April 1 new cars will be taxed at between zero and £2,000 for the first year, and £140 thereafter. Only cars that produce no CO2 emissions at all will enjoy the £0 tax disc.