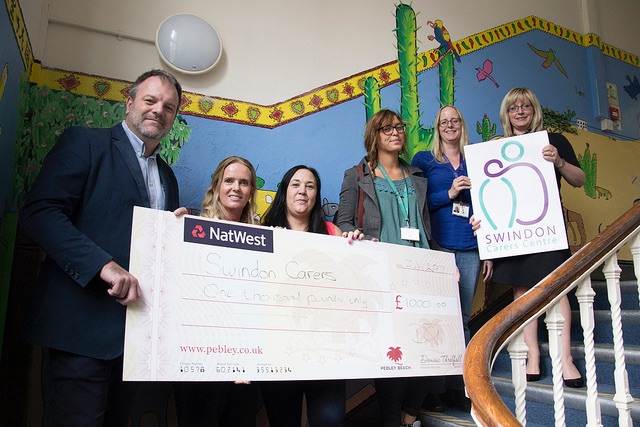 A charity that supports around 4,000 unpaid carers in Swindon is celebrating its best-ever sponsored walk fundraising total, after receiving the backing of motor dealer Pebley Beach.

Dominic Threlfall, managing director of the Paddington Drive-based Suzuki and Hyundai franchise, pledged to match every pound raised by Swindon Carers Centre’s Walk A Mile In My Shoes sponsored walk up to £1,000.

Not only did his pledge spur on supporters to hit their £1,000 total, they exceeded it – raising almost £2,000. With Pebley Beach’s donation, the campaign total stands at just under £3,000.

Schools development officer Ann Giles, who received a giant cheque from Pebley Beach, said: “It’s a record total for our Walk A Mile In My Shoes event. Last year we raised £1,300 – the highest before this year’s event.”

Service development director Fiona Prinzi said: “The support of Pebley Beach means so much. We were jumping up and down with excitement when we found out!”

The money will be used to fund breaks and activities for some of the 4,000 unpaid carers supported by the charity, whose ages range from between five and 96.

For the younger carers, of whom there are around 900, it might mean a trip to the beach. For older carers it could be a trip to Bath, or a Christmas party. According to a recent survey of its registered carers by the charity, 100 percent reported that attending groups provided them with a break, and 98 percent made new friends.

Dom said: “Swindon’s unpaid carers, young and old, do a fantastic job in supporting relatives who could not cope without them. We’re proud to be supporting Swindon Carers Centre.”