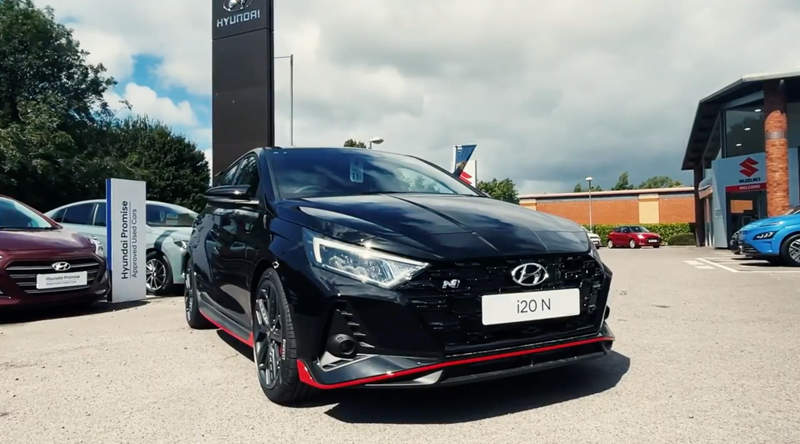 There were celebrations at Swindon motor dealer Pebley Beach this week as a popular hot hatch was named Car of the Year by Top Gear magazine.

Staff and customers at the Hyundai franchise have been blown away by Hyundai's sporty i20N – and now the staff at Top Gear have too.

Hyundai also scooped the manufacturer of the year title – repeating its achievement of three years ago.

The i20N recently triumphed at the Top Gear Speed Week test to claim the coveted Performance Car of the Year title from a group of 26 contenders during a series of thorough tests.

And judges at the Top Gear annual awards 2021 – comprised of Top Gear’s expert editorial team alongside Chris Harris and The STIG – crowned the i20N overall winner after a series of gruelling tests against models from some of the most evocative performance car brands in the world.

The combination of i20N’s thrilling handling and rounded abilities ultimately won the team over.

Jack Rix, editor of Top Gear Magazine, said: “We already knew how brilliant the i20N was after it brushed aside 25 other competitors at our recent Speed Week test to claim our coveted Performance Car of the Year title.

“But you don’t win the top prize in our annual awards without proving your all-round brilliance.

“Having shone on British racetracks and B-roads we decided to throw it in at the deep end to prove its greatness, with an adventure across the Australian outback.

“What we discovered was a low-slung hot hatch that remained both comfortable and completely unflustered across oppressively large distances, and on washboard road surfaces.

“A little Hyundai hatchback that did so well, so far out of its comfort zone, that it was impossible to do anything but make it our overall Car of the Year.”

The all-new i20N builds on the strengths of Hyundai’s renowned, performance-focused N brand and the success of the recently launched all-new i20.

It is equally at home delivering its unique brand of exhilarating performance both on the road and racetrack.

Hyundai was also named Manufacturer of the Year. Through 2021 Hyundai has launched a broad mix of new models across categories, from the i20N that delivers World Rally Championship-inspired styling and performance from just £24,995, to the all-new battery-electric Ioniq 5, the first model in its new Ioniq line-up.

Jack added: “We’ve been here before. Three years ago, we named Hyundai our Manufacturer of the Year. That was based on a trio of impressive products, both naughty (the i30N hot hatch) and nice (the hybrid Ioniq and electric Kona).

“They all remain on sale, joined by an even more diverse cast of characters.

“This year, it’s the sheer breadth of talent in Hyundai’s line up that swayed us: hot hatches (i30N, i20N), hot crossovers (Kona N), hydrogen fuel cell cars (Nexo) and EV that looks and goes better than anything out there (Ioniq 5).

“Hyundai is smashing it right across the board. We’ve known for a while that the Koreans are coming. Well, they’re not any more. They’re here, and they’re doing it better than anyone else.”

Dominic Threlfall, managing director of Pebley Beach, said: "In 2019 we entered a Hyundai i30N into the famous Modball rally, where it joined the starting grid alongside Lamborghinis, Porsches and Ferraris.

"The i20N is the latest of the Hyundai range to don the N badge. Delivering 201bhp and capable of 0-62 in 6.7 seconds, and with striking looks, it's a real head-turner and a firm favourite here in the showroom.

"And for Hyundai to take the Manufacturer of the Year prize is testament to the design innovation and technical prowess of a diverse range that includes industry-leading zero-emission models like the Kona Electric and the Ioniq 5, as well as our pocket rocket the i20N.”