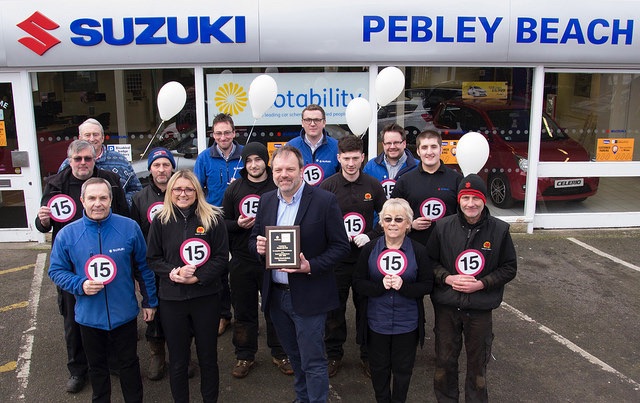 Staff at Cirencester Suzuki dealership Pebley Beach are celebrating their 15th anniversary in the town.

When the dealership opened at Love Lane in February 2002 they were one of six motor dealers in the town. Today, only two remain.

Managing director Dominic Threlfall said: “Pebley Beach was based in Wroughton, but our sales area covered Swindon and Cirencester, and we thought the town would make a perfect base for our customers north of Swindon.”

The Suzuki brand proved a real hit in the town. Reliable and affordable, Grand Vitara 4x4s and the smaller off-roader, the Jimny, were soon a common sight on rural roads around the Cotswolds.

“We’ve built up a great customer base here,” said Dom. “We have customers coming in for services, MoTs and new cars who bought from us when we first opened our doors.”

To celebrate the 15th anniversary of the showroom, Suzuki UK sent Pebley Beach a plaque to mark the occasion. The firm will be getting another next year, when it celebrates 25 years of selling Suzukis in the Swindon area.

Meanwhile, Suzuki has celebrated its best year ever – giving staff another reason for celebration.

Meanwhile, a new model is turning heads in 2017 in the form of the stylish Ignis compact crossover, which starts at £9,999.

“Suzuki has started the year with a string of accolades, and the Ignis – which is completely different to anything else in the Suzuki range – will attract new customers to the brand,” said Dom.