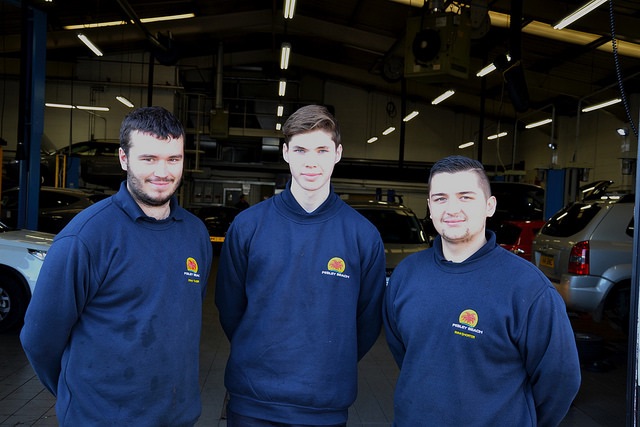 A clutch of new apprentices at Pebley Beach

Award-winning motor dealer Pebley Beach has taken on a clutch of new workshop apprentices to meet growing demand from drivers of a range of marques of vehicles.

Business at the Paddington Drive workshop in Swindon has been buoyed by a number of high-level plaudits. This summer, the company was presented with the Aftersales Excellence Award at the prestigious Motor Trader Awards, and the award for Customer Service at the AM Awards – the Oscars of the motor industry.

Pebley Beach was also voted Regional Garage of the Year in the Motor Codes awards this summer – a title awarded following votes from customers.

Now the company has taken on three new younger trainees to cope with demand.

Ryan Fisher (23) has five years’ experience in the motor trade, working on brands including Ferrari, Maserati, and Land Rover, but did not get the chance to complete his formal three-year training programme.

Dominic Threlfall, managing director of Pebley Beach, said: “We’ve been campaigning for years for the industry to be regulated – a campaign we’ve taken as far as Parliament.

“Customers deserve to have qualified technicians working on their car – that’s why we’re committed to getting young people onto the apprenticeship scheme and seeing it through to the end.”

Dominic’s call is backed by the Institute of the Motor Industry, which is calling for Government to introduce a legal requirement for UK vehicle repair technicians to be qualified to work.

Joining Ryan in the workshop are Ryan Shorter (20) a third year apprentice who has joined the firm from an independent garage, and is studying at Swindon College to pass his Level Three NVQ, and 17-year-old school-leaver Connor Salter, who joined the company after two weeks’ work experience.

Connor will be spending time at the Suzuki training centre in Nottingham to gain his qualifications. “I’ve always been interested in cars, and I’m really enjoying the work here,” he said.

Pebley Beach is the main dealer for the Hyundai and Suzuki brands in Swindon and north Wiltshire, but repairs, services and MoTs cars of all makes and models in its workshop.

In 2014 it was named Apprentice Employer of the Year at the Wiltshire Business Awards.